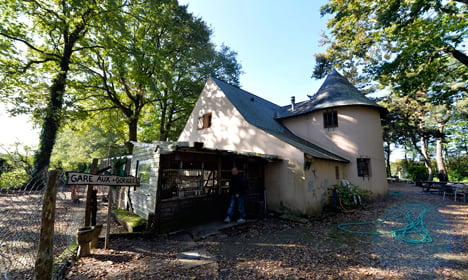 Bailiffs arrived at the home of Virginie Olmos and Sébastien Martin on Wednesday morning with a cheque for 18,000 euros ($20,000) in compensation for their moving expenses. But the couple did not accept the money.

“We refused to take it. They must be joking,” said Virginie Olmos.

“Everything's happened so quickly. They say we have 30 days to leave, but we're staying!”

If they refuse, the airport developers, who own the house they rent, would have the right to begin formal expulsion proceedings.

The house stands on a 1,650-hectare (4,000-acre) site of protected swampland called Notre-Dame-des-Landes, just outside the western city of Nantes where developers want to build an airport they say will provide a major boost to tourism in western France.

Approved in 2008, the €580 million ($747 million) project was due to start in 2014 but its start has been repeatedly delayed due to fierce opposition by environmental protesters.

The airport developers call the area the “Zone d'aménagement différé (ZAD)” — a technical term meaning the site as been earmarked for construction.

But a resolute group of anti-airport protesters who have occupied the area have re-baptised it the “Zone à Défendre (ZAD)” or zone to defend. Today, everyone in this part of France simply refers to the site as the ZAD.

Olmos and her family moved into the house in 2000 after her father, the local postman, came across the property while on his rounds.

When the couple signed their tenancy agreement, they say plans to build the airport were on stand-by and they didn't expect the situation to change.

Their second son, now 12, was born in what Olmos refers to as her “magic house”. The house, which covers 150 square metres, looks like something out of a fairy tale. With a small turret on one corner, it stands in the middle of a hectare (2.5 acres) of land filled with birds and animals including emus, parrots, a baboon, goats, ducks and geese.

For more than a decade, life in their woodland hideaway was very calm.

But that came to an abrupt end in November 2012 when a series of violent clashes between French riot police and environmentalists protesting against the airport exploded right outside her door.

From that point, the family was “stuck behind the barricades” set up by the protesters.

There were no more school buses and rubbish collection services were halted.

They were forced to do everything on foot, walking through the woods and fields to reach the nearest shops which were almost a kilometre away.

It took some time but eventually they learned to live alongside the protestors and today have a good relationship with the so-called “ZADists”.

A community of eco-activists who promote alternative models of economic development, the protesters have built a network of tree houses, cabins, and collective farms across the site where the future airport is slated to be built.

“They taught us to be more self-sufficient and to have a better relationship with nature,” Olmos said. “But everything will stop if the airport is built.”

Pointing to the surrounding trees and fields, she says the area is earmarked for a huge car park.

Martin says he still can't believe that the developers resumed the eviction procedures that had been suspended for three years on the orders of President François Hollande, while the appeals were being held.

The respite came to an end after a court in July rejected all the protesters' objections to the airport.

“Unless we find another house, we're not leaving,” Martin said.

And so far they've seen nothing.

“We've visited five or six houses but we've never found anything equivalent to this, with land for the animals,” he said.

Olmos works as a hairdresser and Martin as a self-employed builder and the couple say they do not earn enough to be able to buy a new house, even though the developers have not charged them rent on their current home for the past three years.

So, for the time being, they are going nowhere.

“When the police come back to try and move us out, I'm sure there'll be a lot of people here to help us,” insists Olmos, feisty to the end.