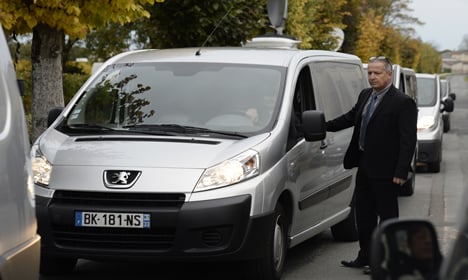 Hearses lined up near the bus crash site on Saturday. Photo: AFP

Experts from a police victim identification unit set up a tented centre overnight with equipment and tables for carrying out autopsies following Friday's collision, a local police chief told AFP.

In the worst accident on French roads in 33 years, a coach carrying members of a pensioners' club on an excursion smashed into a lorry near the village of Puisseguin, among the vineyards of the Saint-Emilion area.

“They will begin working from sunrise, body by body, in a very methodic way” using DNA and dental remains to try to put names to the bodies, said Ghislain Rety, police colonel in the Gironde region.

Many of the victims were thought to have died in the fire, according to emergency workers and local authorities.

Investigators were also due to study the lorry's tachograph, a sort of black box that records the vehicle's speed and journey time.

However it is in a “very, very damaged state”, Rety said. “It's too early to say if it will be usable.”

The wreckage of the vehicles will also be examined to try to establish the circumstances of the crash.

The specialists' work is similar to that done to identify the remains of air crash victims.

They must also still determine exactly how many passengers were on board the coach as there is no official list. “The only list was in the coach, it's burnt,” the police chief said.

The pensioners had been heading south to the nearby region of Landes to visit an outlet and museum specialising in Bayonne ham, a local delicacy.

Police on Friday said the lorry driver was also killed along with his three-year-old son who was sitting beside him.

Eight people, including the coach driver, managed to escape the burning wreckage.

The crash is the deadliest in France since August 1982, when 53 people including 44 children were killed in a motorway pile-up in the eastern Burgundy region.