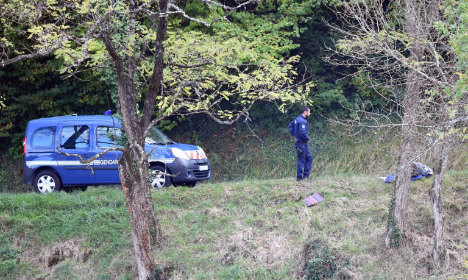 A policeman at the scene of the crash. Photo: AFP
1. What actually happened?
Details of how the actual crash occurred remain unclear. A press conference is set to be held on Friday evening by local authorities and police during which more information should be given.
But information has leaked out from various witness reports and local officials.
We already know that the bus was engulfed in flames immediately after the crash, which is why most of the 41 passengers are said to have died from the flames rather than the impact.
While nothing is confirmed, it seems that the truck had stopped for some reason in the middle of the road. The picture below appears to show the truck on the left hand side of the road, with the driver's cabin jutting off at an angle. Puisseguin mayor Xavier Sublett told reporters that the lorry “appears to have lost control of his vehicle, leaving him stranded in the middle of the road”. He added that the bus was “unable to avoid the accident”.
The bus driver suggested the same thing to a doctor at the scene.
“He told me that he came face to face with a jack-knifed truck that he couldn't avoid,” Doctor Philippe Flipot told Europe 1.
The truck driver, together with his three-year-old son and co-passenger, died instantly.
A legal expert specializing in accidents told L'Express that the extent of damage was consistent with two vehicles travelling at 70 or 80 km/h.
Police will be able to analyze skid marks and the vehicles themselves to determine what happened in the last moments. Coroners will also determine whether drugs or alcohol were factors.
It remains unknown if the passengers were wearing seat belts at the time, and whether this played a part in the death toll. Further details about the passengers are expected on Saturday.
2. How dangerous was the bend in the road?
Local residents have said that the bend is notoriously dangerous to navigate – even in a car – thanks to a drop on one side and a wooded hillside on the other creating a blind corner.
One local said there are no warning signs in the area, either (see overhead view of the bend below). (Photo: Google Maps)
Francois Decauze from the village Petits-Palais knows the road well. He told The Local it is a route used frequently be heavy goods vehicles.
Decauze said the road was narrow and parts of it were not in a good state.
A look at the bend on Google Maps, which has Street View enabled, suggests that it would be a tight fit for two large vehicles to pass, especially at high speed.
Here are two images from Google Street View, the first showing the bend for drivers heading south (like the bus), the second showing the northwards journey (the direction of the truck). (Photo: Google Street View)
3. Why did the fire engulf the bus so quickly?
Considering the 41 bus passengers are said to have died from the fire, questions are being asked as to why the vehicle was so quickly engulfed in flames.
As the bus was only around 7 kilometers into what was supposed to be a day trip to the Basque country, one could assume the vehicle likely had a full tank of fuel. (The bus left Petit-Palais-et-Cornemps , just seven minutes away from where the crash occurred. Photo: GoogleMaps)
But this shouldn't have made any difference, according to Michel Seyt, the president of motoring group FNTV.
He told the AFP news agency that a bus “shouldn't burn so quickly”, noting that the engine of such vehicles are located at the back end.
“Mercedes Tourismos from 2010 and 2011 have a fuel tank at the front, just in front or just behind the wheels,” he said.
“But it's not something that could be hit first in a frontal crash.”
Either way, legal experts told L'Express that temperatures in such situations could reach 750C.