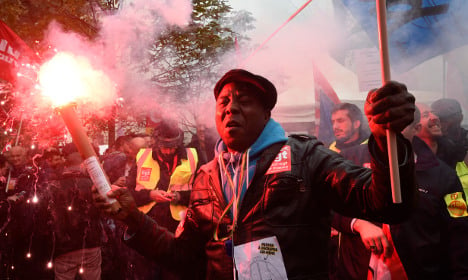 The demos coincided with the the first meeting of company chiefs since unveiling a restructing plan which sparked violence that left two managers shirtless.

Air France CEO Frederic Gagey said 1,000 posts would be cut in 2016 through “voluntary departures” at a meeting of managers and union representatives in central Paris.

He did not say which services would be targeted.

A further 1,900 job cuts due in 2017 have been suspended “in the hope of finding an agreement with pilots and ground staff to improve productivity,” said Didier Fauverte of the CGT union after the meeting.

It was the first such meeting since the violent scenes on October 5, when hundreds of workers stormed a board meeting and attacked managers.

In scenes that made front pages around the world, the head of human resources and another executive were forced to flee with their shirts partially ripped off.

On Thursday, the protests were more peaceful despite a few firecrackers and smoke bombs, attracting some 7,000 people in Paris alone, the CGT said. There were a few renditions of pop song “Tomber la Chemise” (“Drop the Shirt”).

Many voiced their support for the five employees who have been detained over the violence earlier this month and will face trial on December 2 for their alleged role in the violence.

“Are we the bad guys? No,” said Philippe Evain, president of the leading pilots' union.

Air France hopes to save 1.8 billion euros ($2 billion) over two years as competition with global rivals intensifies, but efforts to increase the workload of pilots have been rejected.