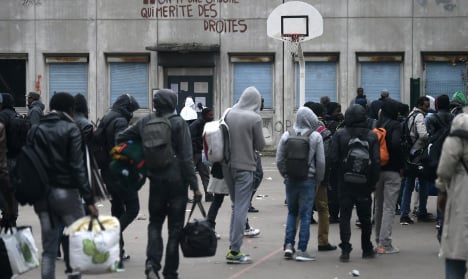 The refugees were moved on early on Friday. Photo: AFP
Police transported the group from the school in a fleet of buses early in the morning, according to AFP journalists at the scene, taking them to hostels and special accommodation around Paris.
“I don't know where we're going, but it has to be better than here: we can have a shower, food. Here, there were too many fights,” said a Moroccan man, carrying two stuffed suitcases.
Paris city authorities said a total of 1,308 people left the dilapidated building, including 40 women.
Authorities ruled last month that the migrants had to leave.
“The idea was to wait until next week, but the situation deteriorated over the past two weeks with serious crimes, a deterioration of health conditions and violence,” said Paris police chief Michel Cadot.
The evacuation passed without incident, although a group of pro-migrant protesters shouted their solidarity from the street.
The building was first occupied in late July, with numbers growing rapidly from around 100 to more than 1,000, made up of a broad mix of nationalities including Sudanese, Afghans and Eritreans.
The Jean-Quarre school was the last big migrant camp in Paris after the removal of two others around La Chapelle and Austerlitz stations over the summer.
“There were risks of an epidemic,” said a volunteer doctor.
The migrants will be housed in a dozen centres for a month while they decide whether to lodge asylum claims.
The school is due to be renovated and turned into a homeless shelter in the coming months.
Some 52,000 people have claimed asylum in France so far this year as part of the huge influx of refugees and migrants seeking new lives in western Europe.