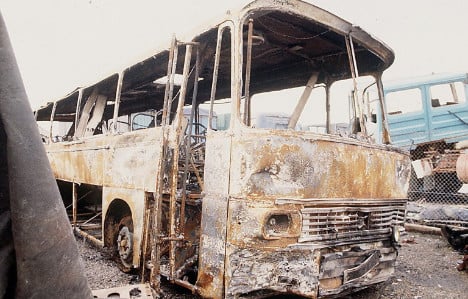 A crash in Beaune, in 1982, saw 53 dead (including 44 children). Photo: AFP
February 10th and 11th, 2016
France was rocked by two school bus accidents in two days. The first, on February 10th, saw two pupils die when a driver careered off a snow-covered road in eastern France.
The next day, six pupils died in Rochefort in western France after a bus collided head-on with a truck.
October 23rd, 2015
A truck collided with a bus carrying elderly French villagers on a day trip killed at least 43 people in Puisseguin, south western France. Among the dead was the truck driver and his three-year-old passenger. The accident became the worst in France for 33 years.
April 16th, 2013
A coach carrying young British seasonal workers crashed into a cliff face near the resort of Alpe d'Huez in the French Alps, leaving one person dead and several others seriously injured.

(A file photo of the sharply-winding descent from the Alpe d'Huez ski resort. Photo: Soumei Baba)
June 2nd, 2008
Seven children killed after a school bus was hit by a TER regional train in the Haute-Savoie region in eastern France. A further 18 were injured. The accident was the most fatal for children since 1982.
July 22nd, 2007
A bus from Poland crashed into a ravine near Grenoble, southern France, killing 26 passengers. The accident occurred on the Rampe de Laffrey, a steep section of road in the Alps. The mountainous region has proved dangerous recently, with many injured in an Alps crash as recently as January.
May 17th, 2003
A bus carrying German tourists crashed on a highway near Lyon, killing 28 dead and leaving 46 injured. The bus driver was reportedly driving 117km/hr on a wet road, where the speed limit was 90km/hr.
September 29th, 1997.
A 100-car pile up in Bourg-Achard, northern France, left 12 dead and 96 injured. The two drivers responsible lost their licences and were sent to prison. (Photo: AFP)
July 10th, 1995
A double decker bus travelling from Barcelona to Amsterdam swerved to avoid a truck on the highway in Roquemaure, southern France, killing 22 and injuring 32.
July 31st, 1982
This accident in Beaune, central France, is France's worst in history. The two buses and two cars involved saw 53 dead (including 44 children).

There are fears that Friday’s crash may not be the last as the government has changed the law that will see bus travel massively increase in the months and years to come.

But speaking after Friday’s, Noel Mamere, a Green party MP from near the site of the accident, said he fears more tragedies in the future.

“If we accept the increase in coach routes along roads that are in a bad state, we will have more accidents,” Mamere told BFM TV.