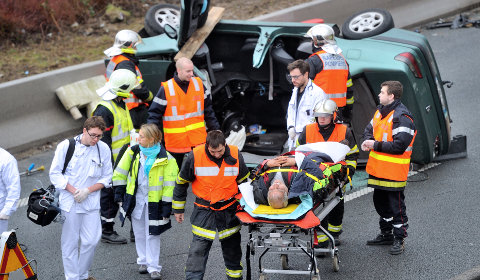 While the circumstances of Friday’s crash are still unclear, the terrible accident comes as the French government struggles to tackle a worrying leap in the number of fatal road accidents.

Investigators will spend the next days and weeks trying to determine the exact cause of the head-on collision between the bus carrying senior citizens and the truck.

But while they go about their work, the French government’s much-publicized, often controversial attempts to cut roads deaths will once again come under the microscope.

President François Hollande has already spoken of looking at whether the laws around coach travel should be tightened.

Prime Minister Manuel Valls and his Minister of Interior Bernard Cazeneuve have repeatedly vowed to make cutting road deaths a top priority for the government.

But their efforts do not appear to be paying off.

Only last month Valls admitted the average speed of drivers in France was on the increase and that drivers were becoming less vigilant. 2014 marked the first time in 12 years that the death toll on the roads in France increased, with 3,384 deaths. In July alone the rate of fatalities saw a 19.2 percent rise.

Those figures have prompted the prime minister to roll out dozens of measures and new laws as he pledged to reduce the number of annual deaths below 2,000.

Among the measures was a plan to roll out another 500 fixed speed cameras on French roads as well as 10,000 dummy cameras for the first time.

That will bring the number of working speed cameras on French roads to 4,700.

Valls has also experimented with lowering the speed limit on several rural roads from 90km/h to 80km/h. With around 10 percent of road deaths caused by alcohol, France has also cracked down on drink-driving, by lowering the legal limit for young drivers to zero.

Other new laws included making it obligatory for child cyclists to wear helmets and motorbike riders to wear gloves.

These measures came after a series of laws were rolled out in January that included banning drivers from using hands-free kits for their mobile phones.

While French motorist groups slammed the new measures as draconian, road safety groups have accused the government of not going far enough.

Many believe the problem lies with French attitudes towards driving.

Jehanne Collard, a lawyer for victims of road accidents in France and an author of a book of the subject, said habits need to change.

“There is a real deterioration in terms of the behavior on the road. Fatal accidents often involving cyclists, pedestrians and scooter drivers are related to excessive speeds and risk-taking, such as overtaking blindly,” she told Le Figaro.

Collard also lambasted the government for turning its back on an issue that can “leave families destroyed”.

“We have had trouble convincing the French of the need for road safety because we have tried to do it by taking punitive measures,” the group’s head Pierre Chasseray told The Local recently.

“To change drivers' behaviour, we have to change the ways of communicating with French drivers.”

Even the PM himself appeared to suggest that the only way to cut deaths was by individual drivers changing their behaviour as he appealed to individuals to take responsibility.

There are fears that Friday’s crash may not be the last as the government has recently changed the law that will see bus travel massively increase in the months and years to come.

But speaking after Friday’s accident, Noël Mamère, a Green party MP from near the site of the accident, said he fears more tragedies in the future.

“If we accept the increase in coach routes along roads that are in a bad state, we will have more accidents,” Mamère told BFM TV.

Mamère was criticised by some for his views.

Others however believe the real danger is the increase in heavy goods vehicles on France's roads.

“We have the means to reduce haulage transport by transferring it to the railways, but in fact we do the opposite. It's a worrying situation,” said Pierre Laurent, head of France's Communist Party.