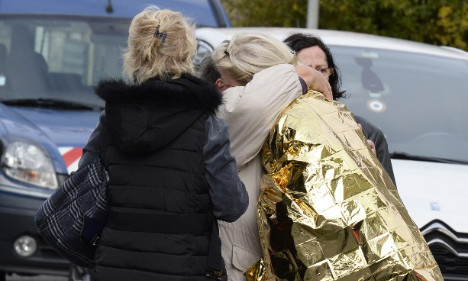 A survivor is comforted soon after the crash. Photo: AFP

Villages around the famous St Emilion wine region of south western France were in shock and mourning after Friday’s devastating coach crash.

Forty-one of the 43 victims of the crash were members of various senior citizens clubs from villages around the region to the west of Bordeaux.

They had set out for a day trip to Arzacq in the French Basque country. They were to visit a factory where the famous Bayonne ham is produced, then eat at the Café des Sports, before taking in a show by local storyteller René Casenave.

But just minutes after setting off their coach hit a truck and was immediately engulfed in flames, with the fire responsible for most of the 41 deaths.

Hours after the crash their charred bodies remained on the coach as forensic teams began the painful process of identifying all the victims. The village of Petits-Palais-et-Cornemps, where their day trip began, was dotted with the cars of the victims who had driven to the village to start their journey.

“They left to go and have a fun day out and they ended up being burned to death,” Francois Decauze, a local resident and president of the village walking club, told The Local on Friday.

“It’s extremely shocking and upsetting, the brutality of the tragedy and also the number of victims involved.

“These people were in good form, most of them in relatively good health,” he said.

Francois Decauze’s wife was supposed to be on the bus trip, but pulled out at the last minute as her mother was unwell.

“She is in shock and has gone to be with her mother who knew a lot of people on the bus,” he said. “We are starting to realise that these people have gone. It’s tragic.”

Decauze said there were 18 residents of his village on the bus. It is unclear how many survived. Among the dead from Petit-Palais was the senior citizen club’s president Michel Rogerie. (The bus left Petit-Palais-et-Cornemps , just seven minutes away from where the crash occurred. Photo: GoogleMaps)

“It was just a normal trip. He goes on four or five a year,” his son Florent told Le Parisien newspaper. He had asked me to look after his cat and dog for the night. He was supposed to come back tonight.”

The network of senior citizens clubs had helped create a bond between the different villages in the area of rural France, where many people will have known some of the victims involved.

“Everyone has been impacted by the tragedy, because we all know someone who was on that bus.”

These were the words of Xavier Sublett, the mayor of the tiny village of Puisseguin near where the accident took place.

Families are anxiously waiting for police to release a definitive list of the victims. A special area had been set aside for the families in the village of Puisseguin.

A memorial service for the victims is expected to be held at some point over the weekend.

Prime Minister Manual Valls, who was at the scene on Friday, called the accident “a terrible shock for France”.
“We want to express our pain, our compassion, and our condolences to the families and to those close to the victimes,” he said.
“Today France and the French are in mourning.”