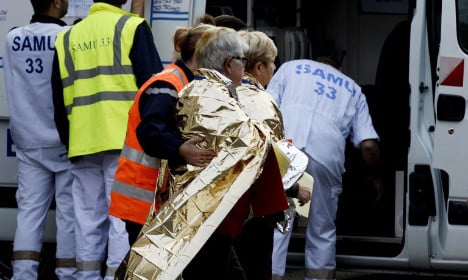 A survivor is taken from the crash scene. Photo: AFP

“Everyone has been impacted by the tragedy, because we all know someone who was on that bus.”

These were the words of Xavier Sublett, the mayor of the tiny village of Puisseguin, the location of Friday's tragic bus crash that left at least 43 dead and several others fighting for their lives.

The crash between a truck and a coach carrying senior citizens from villages around the region occurred at 7.30am on Friday morning, just minutes after members of the local senior citizens club had boarded the bus in the village of Petits-Palais-et-Cornemps.

According to reports the truck swerved as it rounded a dangerous turn in the road. Witnesses who saw the aftermath described the horror of what they saw.

One witness who drove along the road just minutes after the crash site described what he saw as a “scene from war”.

“I saw a huge, thick column of smoke. I was shocked. Then I saw a police car and fire trucks all over the place,” the man named Nicholas told RMC radio.

“I had the impression it was like a scene from a war and I am not exaggerating. The further I went along the road, the more I realised that something very serious had happened.

“At the exit of the village of Puisseguin, firefighters had put up huge tent with a sign saying ‘command centre’,” said Nicolas.

François Decauze, whose wife was set ot go one the trip before cancelling at the last minute told The Local: “We are all in shock. It’s terrible. We don’t know what to do. Our friends were on board the bus.

“They went out to enjoy a day trip and ended up burned to death,” Decauze said. A butcher in the village told The Local residents were in disbelief.

“It's a disaster. The village is in shock,” Mr Paludetto said. “The crash happened a few hundred metres away. All the roads are blocked.

“There are helicopters above and firefighters and police are everywhere. There must be at least 10 ambulances.”

Yvette Seguy, who runs the village bakery in Puisseguin told The Local: “It's terrible what has happened. Everyone is in complete shock and there is a real sadness around the village. It's a tragedy.”

Another resident living nearby said: “It happened just behind us, but we didn't see it, the first thing we knew was when we heard all the sirens.”

The crash has devastated the local region, with the victims coming from villages across the area.

“We don't have the list of victims, so we are in the dark,” she said. “But they all came from local villages so many people will have been affected.

“Everyone is just running around everywhere, trying to deal with what's happened.”

Tributes to the victims included this from a man named Serge, a neighbour of one of the victims. “I heard about it at the same time as everyone else. This is my closest neighbour, he was almost a family member,” he told BFM TV.

“I saw the plumes of smoke this morning and I thought it was just a simple fire, I couldn't imagine that it would be something like this that would hit us so closely.”

Nicolas described a “strange atmosphere” in the area when talking to RMC.

“In the centre of Petits-Palais there are all the cars left by the senior citizens who went on the coach trip. As I passed by the church there were four people there, one who had his head in his hands.

“We are just not used to this. Everyone is panicking here,” said. “For us locals, this is like a scene from a war. We are thinking of everyone involved because they all came from round here.

“We are in shock and in distress. It’s hit us like a tsunami.”