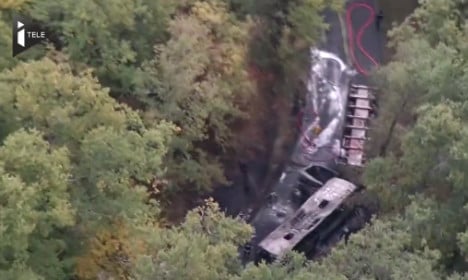 An overhead shot of the scene of the crash. Photo: iTele Screengrab
Key information
– Death toll increased to 43 as young boy's remains found
– Victims, mostly pensioners, came from the local region
– Eight passengers including the bus driver survived
– Resident tells The Local the village is 'in shock'
– President Hollande says government has 'fully mobilized'
– Witness: 'It was like a scene from a war'
Officials said that 43 people have died in a head-on collision between a bus and a timber truck in south western France at 7.30 on Friday morning.
The figure was revised in the afternoon after the remains of the truck driver's son, a three-year-old boy, were found in the truck's cabin, the local prefecture confirmed.

All eight survivors were in hospital, three of whom were sent to Bordeaux for brain trauma and burns. The other five are in a local hospital. None are critically injured, an official report said.

The accident, the worst in 33 years, occurred 60 kilometres east of Bordeaux, near the village of Puisseguin on the departmental road D17.

TV images showed the charred shell of the burned out coach, which was carrying senior citizens from the local region on a day trip. Both vehicles were engulfed in flames as a result of the crash.

Most of the victims died in the fire, according to emergency workers and local authorities in the department of Gironde. The bus driver is understood to have survived. The truck driver and his young passenger did not survive.

Xavier Sublett, the mayor of the tiny village of Puisseguin, said it was “clearly” the truck that lost control.
“It crossed to the other side of the road. The bus driver saw the accident before it happened and tried to avoid it, but the truck hit into him,” he told RTL.
“He couldn't do anything to stop it, but he managed to press the release button to open the doors and allow people to get off.” Around 60 firefighters were called to the scene to deal with the crash.

The bus, which was carrying 49 passengers and a driver, had departed early Friday from Petit-Palais-et-Cornemps village near the site of the accident to take its elderly passengers out on an excursion to the Basque country in south western France.

A local authority press release says there are eight people injured: two with brain trauma, two with burns and four lightly injured, in addition to the 42 people killed.
They have set up a support centre for relatives in a local school. (The bus left Petit-Palais-et-Cornemps , just seven minutes away from where the crash occurred. Photo: GoogleMaps)

Initial reports said the bus skidded as it went round a turn and smashed into the truck but other reports say it was the truck that swerved out of control as it went into the bend and hit the bus.

Locals say the turn (seen below) is known for being hard to navigate, with one resident who lives just 500 metres from the crash scene telling BFM TV the bend is “dangerous – even for cars”. He added that there are no signs to warn of the danger, and that one side of the road has a small drop, while the other is angled in such a way that its “almost a blind spot”.

A butcher in the village told The Local that residents were stunned.
“It's a disaster. The village is in shock,” Mr Paludetto said. “The crash happened a few hundred metres away. All the roads are blocked.

“There are helicopters above and firefighters and police are everywhere. There must be at least 10 ambulances.”

Another resident living nearby said: “It happened just behind us, but we didn't see it, the first thing we knew was when we heard all the sirens.” France's President Francois Hollande has said “the French government has totally mobilised after this terrible tragedy”.

France's Interior Minister Bernard Cazeneuve, Bordeaux Mayor Alain Juppé, and Prime Minister Manuel Valls have been on hand on Friday to give support.
The PM tweeted his condolences, sending his compassion and support to the families of the victim.

Tributes to the victims included this from a man named Serge, a neighbour of one of the victims, Michel.
“I heard about it at the same time as everyone else. This is my closest neighbour, he was almost a family member,” he told BFM TV.

“I saw the plumes of smoke this morning and I thought it was just a simple fire, I couldn't imagine that it would be something like this that would hit us so closely.” A resident of Petit-Palais-et-Cornemps told The Local they were still trying to find out information about who was involved.
“We don't know what has happened or who was involved yet. My uncle is a member of the senior citizens club but I'm trying to find out whether or not he was on the bus,” said the resident.
According to Sud Ouest, the mayor of Petit-Palais-et-Cornemps, Patricia Raichin lost three members of her family in the accident.
The accident is the worst in France since 1982, when 53 people were killed in Beaune, central France. 44 of them were children.