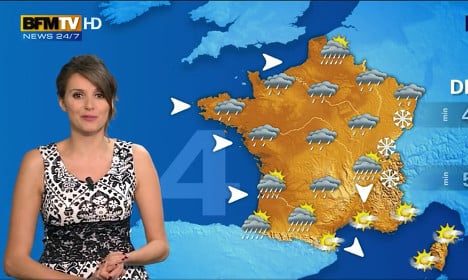 BFM TV weather woman Fanny Agostini needs to look on the bright side when it comes to forecasting Normandy's weather. Photo: Screengrab BFMTV

Hervé Lebel, who created the fun park Festyland near the town of Caen and founded the tourist website Normandie Sites, has had enough of negative TV weather forecasts about the region in northern France.

He says weathermen and women on French TV have a huge responsibility to be accurate and look on the bright side when giving their forecasts for a region that relies so heavily on tourism.

“Normandy tourism relies heavily on Parisians, but when they watch the TV weather forecast on a Thursday night and it suggests rain in Normandy at the weekend, then no one comes and hotels lose 50 percent of their takings,” Lebel tells The Local.

“Forecasters need to know they can have a huge negative economic impact on the region. They have a huge responsibility.”

The businessman wants the residents of Normandy to help him establish a network of webcams that will show the real weather across the region. (A bad day to go the Deauville beach in Normandy. Photo: AFP) (A very bad day to go to the beach in Normandy. This was taken at Saint-Marcouff. Photo: AFP)

And Lebel also wants weather presenters to be more positive and in particular more accurate when it comes to the forecasts for Normandy and indeed northern France as a whole.

“The worst is when they say “risk of showers”, because if people see that they won’t come. But why do they have to be negative?” he said. “They give the impression the whole of Normandy is underwater.

“They also give the impression that if it's going to rain in Cherbourg for example then it’s raining across the northern coast of France. But it’s 1,000 km long. We are given the impression the weather is the same in Brest, Brittany as it is in Pas-de-Calais.

“They don’t do the same for the Atlantic coast or the Mediterranean coast, where they give more accurate forecasts.”

“Now French people always say 'It’s raining like in Normandy', as if it’s the only place in France where it rains. People know very well that the sun comes out in Normandy,” said Lebel. (The sun does come out in Normandy. Don't believe what the forecasters say. Photo: AFP)

Lebel is calling on politicians running for December’s regional elections to back his campaign.

He wants the town of Caen, in central Normandy to become the place of reference for forecasters rather than the city of Cherbourg, which stands on the northern tip of the Contentin peninsular (see map). “The weather in Caen is a lot more temperate,” he says.

Lebel says he is grateful for the legions of British tourists who visit Normandy and who don’t appear to be put off by a hint of rain fall.

“If it rains in the morning the only people in the queue for the fun park are British,” he said. “They say ‘if we don’t go out in the rain, we’d never go out at all.”

“They are more used to it and say the weather in Normandy is fantastic. There’s never a problem, they just put on their rain jackets.

“It’s clear that the British can put up with a bit of rain better than the French can,” Lebel said.

But one weather presenter hit back at Lebel's complaint saying it was impossible to be totally accurate during a national weather show.

“People often complain about this when it comes to the north of France,” said France 2’s Anaïs Baydemir.

“We have a national forecast, we cannot have a forecast that’s too regional. We just don’t have the time. Fortunately there are smartphone apps now that allow us to get a more accurate forecast.”