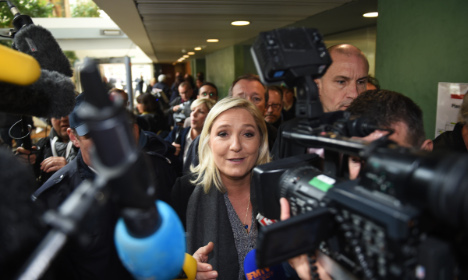 National Front leader Marine Le Pen. Photo: AFP
As key regional elections approach, with Le Pen's National Front leading opinion polls in several areas, the head of the Socialists Jean-Christophe Cambadelis and former president Sarkozy — now boss of The Republicans party — both complained to the country's broadcast regulator.
The “Des Paroles et des Actes” show, which translates as “Words and Acts” and airs on Thursday evening, is a monthly programme that revolves around a political figure, presented by David Pujadas, one of the country's most famous TV journalists.
Le Pen — a candidate for the Nord-Pas-de-Calais-Picardie region of northern France in the December polls — has been invited five times in 36 programmes, and both Cambadelis and Sarkozy complained the latest invitation was “a clear violation of the rule… of equity in speaking time.”
“This new invitation creates a distortion in media equity, which on top of everything else profits a far-right movement,” Cambadelis wrote in a letter to Sarkozy.
Under French law, candidates to elections must be given equitable speaking time during the official campaign period.
The two then complained to the broadcast regulator, albeit separately.
To “calm the controversy,” France Televisions — the group that runs state TV channels and radios — announced Thursday it had invited Le Pen's Socialist and Republicans election rivals at the last minute for a debate.