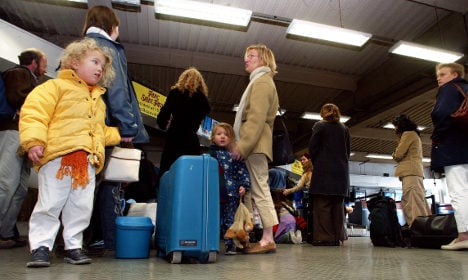 "If the seventh circle of Hell were a place on earth, it would be ‘Paris’ Beauvais-Tillé," one reviewer said. Photo: AFP

In what won’t come as a surprise to many readers, Beauvais-Tillé International Airport has been named the tenth worst in the world and the worst in Europe in a survey by The Guide to Sleeping in Airports travel website.

And clearly users aren’t happy with the Paris contribution to the list.

“If the seventh circle of Hell were a place on earth, it would be ‘Paris’ Beauvais-Tillé,” one reviewer told The Guide to Sleeping in Airports.

Other reviewers listed grievances including a lack of chairs and unhelpful staff, while a shortage of toilets and poor hygiene standards also raised the ire of passengers at the facility which dubs itself “the smart airport”.

Readers of The Local, meanwhile, seemed put out by the sheer (90km) distance from Paris.

@olivergee23 Was there once, years ago. Had to get a coach from a random carpark in a Paris suburb. I thought we'd gone into Belgium.

@TheLocalFrance It was years ago, but I yelled at the airline saying, “This isn't Paris” LOL.

At best, the airport “in what is plausibly a sparsely furnished converted factory with pre-fabricated ‘temporary’ 10-year old extension” appears to be functional.

@TheLocalFrance worked well enough. No frills, no service, like dining at a vending machine.

For the bosses at Beauvais airport, there is, however, one silver lining, albeit it a small one .The facility, it seems, is on the up. Last year it was ranked four places lower as the sixth worst in the world.

Have you used Paris Beauvais airport? Tell us what you thought of it in the comments section below.