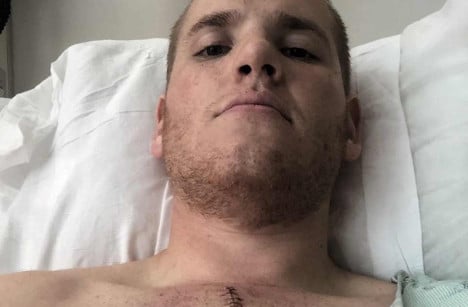 The latest picture of US airman Spencer Stone. Photo: GoFundMe

Airman Spencer Stone was stabbed in Sacramento earlier this month after he got into a fight with a group of men, not long after he suffered deep slash wounds overpowering a heavily-armed gunman on a train in northern France.

According to a fundraising campaign carried out to help his family, the American was stabbed four times in the US attack – in his heart, lung, liver, and back.

“He had to have open heart surgery to save his life from the knife wound to his heart,” the organizers of the fundraiser explain.
With the text is an image of a bare-chested Stone, showing a scar running from his neck all the way down his chest. Two dozen heavy duty stitches are also on display. The fundraisers are calling on the public to donate money to assist Stone's family. The family are losing money as they spend time in the hospital with the American. The fundraiser has earned over $10,000, and aims to make $50,000.
Stone's medical costs are being covered by the US military.
The airman was lauded as a hero in France after suffering deep slash wounds as he helped to overpower a heavily-armed gunman, 25-year-old Moroccan Ayoub El Khazzani, on August 21st on a train in northern France. (US Secretary of Defense Ashton Carter presents the Airman's Medal to Spencer Stone. Photo: AFP)
Armed with a pistol, an assault rifle and 270 rounds of ammunition, Khazzani is accused of seeking to massacre passengers on the Amsterdam-Paris train.
Stone was awarded the Legion of Honor, France's highest decoration, along with Army National Guard Specialist Alek Skarlatos and Anthony Sadler, a civilian.
The trio was also invited to the White House by President Barack Obama and Stone received a Purple Heart and an Airman's Medal from the Pentagon.