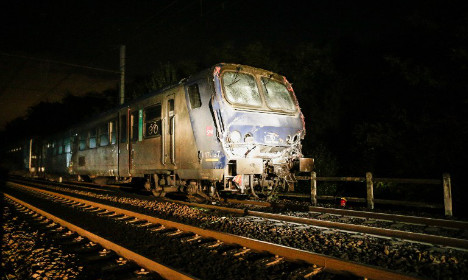 Thirteen passengers were injured in the crash. Photo: AFP
The train collided with the truck at 5pm on Wednesday at a level crossing in the town of Toulenne, which stands on the line between Bordeaux and Toulouse.
It remains unclear exactly why the truck was on the tracks, noted rail operator SNCF, but an investigation has been launched. (The resident of the home above was taken to hospital. Photo: AFP)
Among the injured were the truck driver, 13 of the train's 60 passengers, and a resident in a nearby house that was damaged.
Eight people were taken to hospital, the rest suffering only minor injuries. (It remains unclear why the truck was on the railway at the time. Photo: AFP)
Over 80 firefighters were dispatched to the scene, many to deal with a blaze inside the train.
The accident was on a busy track between Bordeaux and Toulouse, and caused serious infrastructural damage, reported Le Parisien newspaper.
There were heavy delays through Wednesday night and into Thursday morning. (The truck driver was also taken to hospital. Photo: AFP)
The incident marks the second time a TER regional train has made headlines this week.
On Tuesday, a train in northern France travelled with no brakes for 19 kilometres after hitting a cow. While no one was hurt in the incident, the fate of the cow remains unknown.