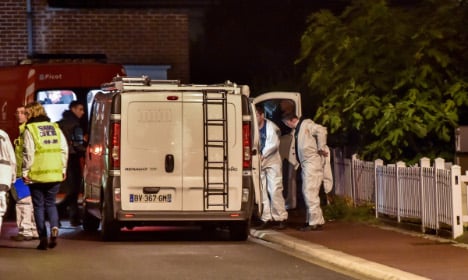 Forensic police and emergency services workers stand outside the house where the family was found. Photo: AFP
The bodies of a six-month-old boy, his four-year-old brother and 10-year-old sister along with their mother, 40, were found in their beds at the two-storey home in a residential neighbourhood, about seven kilometres west of Lille.
The father, 42, had hanged himself and left a note, dated October 16th, explaining his actions, local  prosecutor Frederic Fevre told AFP.
“He spoke of being in debt and major financial difficulties,” said Fevre.
“We can't exclude the possibility that at least one of (the family) were suffocated,” he added.
Police sealed off the house and were investigating the tragedy.
Christelle, a neighbour, told AFP that the family had only lived in the area for “around a year”.
“This is a very calm and residential neighbourhood, the children often rode their bikes and scooters on the pavement,” she added.
According to another source, the family had not been seen for several days.
An aunt and a childminder sounded the alarm and were taken for psychological counselling after rescue workers discovered the five bodies.