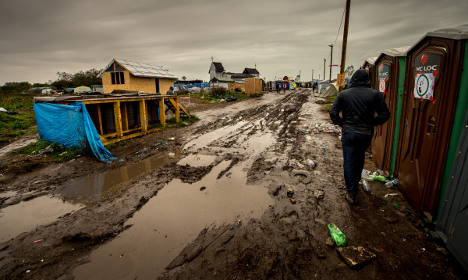 The "Jungle" camp at Calais where refugees live in conditions worse than in a war zone. Photo: AFP

France's interior minister on Wednesday reinforced security in the port city of Calais and said women and children would be given heated tents as migrants and refugees in a makeshift camp face the bitter cold.

The so-called “New Jungle” camp, which is around an hour away on foot from the centre of the northern French city, has swelled in size over recent months as more and more migrants arrive, wanting to cross over to Britain.

Some 6,000 people are now camped out there in cold temperatures, and as winter approaches, aid groups fear that wretched conditions in the area will deteriorate further.

Bernard Cazeneuve, who visited Calais for the seventh time as the migrant crisis shows no sign of abating, said more police would be deployed in the area and that a centre that houses women and children would offer 400 places by the end of the year from the current 200.

“In the meantime, heated tents will be set up… by the end of the week,” he said, promising that “no woman, no child will remain without a shelter in this city.”

But even as Cazeneuve vowed to ease the plight of the refugees and migrants aid groups were once again raising the alarm over the horrific sanitary conditions in the slum. 'Conditions worse than a war zone'

“The sanitary situation of the migrants in Calais is worse than in a country at war,” Mady Denantes, a doctor who is working for the Medecins du Monde (Doctors of the World) charity, told L'Express news site.

“It's not dignified of France. Even in the poor countries or those at war the camps are not in this state,” she added. “It's appalling. At Calais, it's like the rules of public health don't apply.”

Earlier this month French rights chief Jacques Toubon issued a similar warning about the health conditions for migrants and only last week humanitarian aid groups warned that the Jungle camp was “on the brink of collapse” due to the huge numbers living there.

With the additional police forces announced by Cazeneuve, some 1,125 officers will be deployed in Calais and the surrounding areas, from where migrants and refugees from the horn of Africa, Middle East or Afghanistan try to cross to Britain onboard trucks, ferries or through the Channel Tunnel.

Tighter security has meant the number of illegal crossings to England — which numbered up to 150 per day in August — have slowed. But many migrants and refugees remain in the “New Jungle” camp, whose winding slum-like alleys are dotted with crude shelters made of wood and salvaged material.

Earlier this week, Calais Mayor Natacha Bouchart raised the prospect of bringing in the army to watch over the camp “in which we don't really know what is going on.”

France has vowed to build a tented camp for 1,500 refugees that will be ready in January.

However humanitarian organisations, who have long been demanding the French government act, have been left bitterly disappointed by the' “half measure”.

“We had hoped the French government would show a willingness to lead the way in Europe on this issue,” Vincent de Coninck of aid organisation Secours Catholiques told The Local in September.