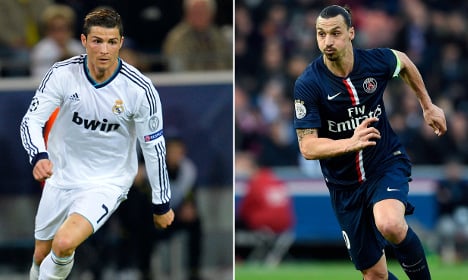 The two teams, who harbour ambitions of going all the way in Europe's elite club competition, are locked together at the top of Group A having both beaten Malmo and Shakhtar Donetsk without conceding a goal.

Both sides are therefore well on course to qualify for the last 16, but their double confrontation over the next two weeks — they also meet in the Spanish capital on November 3 — will likely determine who wins the section and thereby sets up a more favourable draw in the first knockout round.

The all-star cast for the game will be headed by PSG's Zlatan Ibrahimovic and Real's Cristiano Ronaldo, who have both become the all-time leading scorers for their respective clubs since the start of this month.

Both players are bidding to win the Ballon d'Or, world player of the year award.

Madrid's preparations for the match — which comes ahead of a testing run of games in which they will also meet Celta Vigo, Sevilla and Barcelona in La Liga in the next month — have been overshadowed by injuries.

Gareth Bale is set to miss out with a recurrence of a calf injury suffered in the 3-0 win against Levante at the weekend, while James Rodriguez, Pepe and Dani Carvajal are all expected to be sidelined in Paris.

Karim Benzema is also a major doubt due to a hamstring strain.

However, Rafael Benitez's men have been boosted by the return of Luka Modric to training after an abductor muscle injury and captain Sergio Ramos is reportedly set to start against the French champions after overcoming a shoulder injury.

Madrid are joint top of La Liga and are still unbeaten this season under Benitez, but Spain midfielder Isco admits that record will be seriously tested at the Parc des Princes.

“They are one of the most complete sides in the competition and they have great players,” Isco told realmadrid.com.

“The two matches against them will be very hard and will be defined by the small details. We need to follow the same path as we have up to now, scoring a lot of goals and conceding very few.”

Benitez hits back at Blanc

The match is also a clash of styles, with PSG's possession-based approach in stark contrast to Madrid's penchant for lightning fast counter-attacks.

Paris coach Laurent Blanc had earlier evoked that contrast when he said that Real “since the start of the season, seem quite defensive to me, albeit they take their chances.”

He added: “I prefer to have the ball and apparently Real are happy to defend deep and hit teams on the break, because they go at 3,000 kilometres an hour.”

But that clearly irked Benitez, under whom Madrid have not lost in 10 games this season and have scored 24 goals, conceding only two.

“Our team is a team that attacks. The statistics say so and our idea is to win matches by scoring goals,” said the 55-year old, a Champions League winner with Liverpool a decade ago.

“At Liverpool, Chelsea, Napoli, Real Madrid, my teams have always scored goals. Everyone is entitled to their opinion.

“Real Madrid is the team that scores the most goals, shoots the most, I have nothing else to add. When we need to attack we do so.”

Like their opponents, PSG are yet to lose this season and they are top of Ligue 1 after winning 2-0 at Bastia at the weekend.

Indeed, that result left them unbeaten in their last 20 games in all competitions since a 2-0 defeat against Barcelona in the quarter-finals last season's Champions League in April.

In addition, first-choice goalkeeper Kevin Trapp faces a fight to recover from a thigh injury in time, so Salvatore Sirigu is standing by to replace him.

“Real can hurt you at any moment. In midfield and up front all of their players can make the difference,” warned PSG striker Edinson Cavani.

Meanwhile, Argentina winger Di Maria will be eager to feature for Paris against the side he helped win the Champions League in 2014 with an outstanding performance in the final against Atletico Madrid.

However, he says he will not produce his trademark celebration, his fingers forming the shape of a heart, should he score.

“I won't celebrate because in my heart I have not forgotten what I went through with Madrid. It was unforgettable, a magnificent memory that will always stay with me,” Di Maria told Canal Plus.

While Paris have faced Barcelona six times in the last three seasons, they have not come up against Real for two decades.

Back then, the French side knocked Madrid out of Europe in consecutive seasons, beating them in the UEFA Cup quarter-finals in 1993 when a legendary late goal by Antoine Kombouare secured a 5-4 aggregate triumph, and then coming out on top in the Cup Winners' Cup quarter-finals a year later.