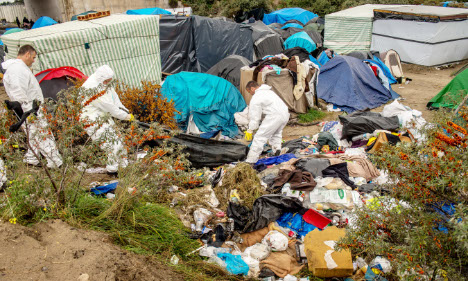 City workers clear waste from Calais. Photo: AFP
High profile personalities from France came together on Wednesday and put their names behind a push to “extricate Calais from its current indignity”, a move kicked off by the Libération newspaper.
The list includes Jurassic Park actor Omar Sy, Oscar-winning The Artist director Michel Hazanavicius, footballer turned actor Eric Cantona, and celebrity French economist Thomas Piketty.
“We decided to join voices to say no to the situation of the exiles in Calais, who are living without any rights,” the text read, condoning what they labelled a “public disengagement” in the matter.
“These five to six thousand men, women, and children are exhausted by a terrible journey, and have been left to themselves in shanty towns,” the text read. The writers, who also included philosophers, writers, intellectuals, and scientists, questioned why the refugees must suffer through just one meal a day, scabies outbreaks, and no dental care.
“Women are being raped and children are left to themselves in the trash piles. There is almost routine police violence, and racist attacks carried out by far-right activists. For how long will we remain silent?”
The paper's spread comes on the same day that France's Interior Minister Bernard Cazeneuve is set to pay a visit to the campsite, his second in recent months and seventh overall.

When he was last there in May, he urged the Calais population to forget about going to the UK and seek asylum in France.
“We must make them understand clearly that asylum in France offers the best change for them,” he said at the time.
It's unclear whether he will push the same message on Wednesday, especially in light of an official report published on Tuesday that said France rejects 74 percent of asylum applications.
The New Jungle is home to an estimated 6,000 refugees who mostly live in tents. Aid groups said this week that humanitarian efforts are “on the brink of collapse” as the cold winter months approach.
The refugees have chosen Calais for its proximity to the Channel Tunnel, where many try to sneak onto trucks and trains each night in search for a better life in the UK. Sixteen have died since June attempting to make the dangerous crossing.