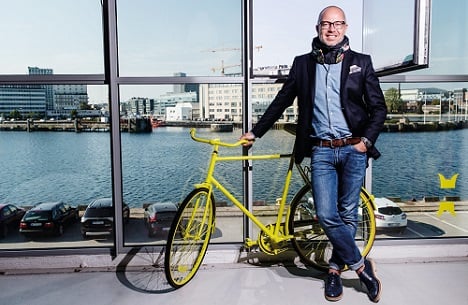 In the US alone, two cyclists die nearly every day in motor vehicle crashes. The vast majority of them, 83 percent, weren't wearing helmets.

In 2005 two Swedish students, Anna Haupt and Terese Alstin, started thinking about what they could do to change that.

The “airbag for cyclists” was their innovative solution: a collar worn about the neck which turns into an air helmet upon impact.

“During the seven years that followed, they went from what many perceived as an unachievable pipe dream to actually having the product developed and brought to the market,” Fredrik Carling, CEO of Hövding,  tells The Local.

The Hövding helmet was launched in Sweden back in 2011, quickly becoming the media’s darling and taking the world by storm and cyclists by heart.

The US, however, is not among those countries – despite the company receiving hundreds of requests for the product.

“In the US there are regulatory standards which, for no obvious reason, are slightly different from European standards,” Carling says.

The Hövding helmet, due to complicated trade procedures and regulations, has not been certified and stamped as “safe” in the US – even though in Europe it has been shown to perform significantly better than traditional helmets.

For Hövding, the obvious solution is TTIP, the Transatlantic Trade and Investment Partnership.

The bilateral freetrade agreement between the EU and the US would make trade between the two countries much easier, reducing regulatory barriers, easing mutual recognition of safety standards – and letting Hövding finally enter the American market.

“My plea to the US is to accept that Europeans hold just as high standards, and let the product through on the back of EU certification,” Carling says.

“I don’t see why that shouldn’t happen. It would be a breakthrough, for the US and Europe to actually accept that they both have high standards.”

But why not just test the Hövding helmet according to American rules?

“In order to test a novel product like Hövding, you need to have developed a testing method and you need some specific equipment. And that doesn’t exist in the US.”

Carling stresses that this is not about lowering safety standards:

“As a result of using airbag technology, we have a product which is tremendously better at protecting cyclists,” Carling explains.

Testing by Folksam, one of Sweden’s largest insurance companies, has shown that the Hövding helmet performs three times better than traditional helmets.

“In fact, if you are in a crash at the speed of 25 kilometres an hour where your head is hitting the pavement, the risk of fatal injury with a traditional helmet is more than 30 percent,” Carling notes. “With Hövding, that risk is reduced to nearly 0 percent.” To date the Hövding helmet has been worn in over 200 accidents in Europe, and has worked “flawlessly” in each one.

“It’s incredibly frustrating,” Carling exclaims. “I mean obviously from a sales perspective, there’s a huge market there, larger than some of our key markets today. But for me and for most of the people at Hövding, it’s more frustrating on a personal level. We have to say daily, ‘I’m sorry, Mike, I’m sorry, Sue, but at this point we can’t help you.’”

A free trade deal between Europe and the US wouldn’t just benefit Hövding and American cyclists, but innovative companies across both continents, says Carling:

“I think one great group that would benefit are the people and companies trying to bring breakthrough innovations to the market, the ones who are really pushing the envelope,” he says.

Bigger companies may have the means to handle the extensive and costly procedures, but for small ground-breaking companies like Hövding, the lack of an agreement on regulatory standards is not just a roadblock for sales, but also job development and overall business growth.

“If we could enter the US market, we would need a team there,” Carling says.

“It’s also an opportunity for individuals and businesses in the US to grow a livelihood and employ people. Bringing Hövding to the US would save lives and create businesses and jobs.”

So can Hövding reach the US without help from an agreement like TTIP?

“We try to work on the ethos that nothing is impossible,” Carling says. “But without an agreement, it is a timely and cost-consuming endeavour. It’s a shame that it has to be as cumbersome as it is today.”