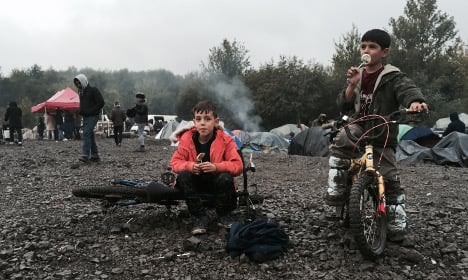 A muddy clearing in a wood, bordered on one side by the motorway leading to the ferry ports of Dunkirk and Calais and on the other by neat streets of suburban houses, is now home for Dlir Kader and his family.

The Kurd arrived at the camp in Grande-Synthe, on the outskirts of Dunkirk, this month along with his wife and four children – the youngest is his seven month-old daughter – after fleeing northern Iraq when the Islamic State (Isis) took control of his town.

The family sit in the drizzle around a small fire where they cook dinner next to the ragged tents that do little to protect them from the elements.

“Germany (which has a far more welcoming attitude to migrants than Britain) is no good for us. The language is too hard and we don’t have any relations there, like we do in England,” said Kader. But he said that after their long trip through Turkey, Greece and the Balkans, they had no money left to pay the people smugglers who hang around the camp and who charge hundreds and sometimes thousands of euros for help in sneaking into the back of a lorry on its way to Britain.

The settlement in Grande-Synthe has existed since 2006 but for years had fewer than 100 migrants. Since September its population has exploded.

The people smugglers decided to move some of their clients to less congested spots as Calais become over-crowded and after security at the ferry port and the Eurotunnel terminal was boosted after chaotic scenes this summer that saw hundreds of migrants try nightly to clamber onto trains heading to England.

Another camp in Téteghem, on the other side of Dunkirk, now houses around 500 migrants. In another camp further inland, 300 migrants, most of them Eritreans, live in equally insalubrious conditions as they wait for their chance to get to the UK.

Other smaller camps, some with just a few dozen migrants, are dotted along the motorways leading to the coast.

“We were heading to Calais with an aid convoy but aid groups there told us to come to Grande-Synthe instead because they are getting so little help,” Joby Andrews, from Bristol in England, as he prepared to leave the town to catch the ferry back to the UK. He and a group of friends have set up what they call the Aid Box Convoy and earlier this month arrived in Grande-Synthe with eight vans and trailers loaded with aid.

The boxes they distributed to camp dwellers – each containing a stove, solid fuel, rice, tins of food, toiletries and a wind-up torch – were snapped up by the migrants, who also include a small group of Vietnamese nationals.

The local authorities have provided half a dozen prefabs equipped with showers and toilets, and say they will soon set up large, sturdy tents to provide better accommodation for the migrants. But for the moment conditions in the camp are squalid and will worsen as the winter sets in.

Hundreds of tents are grouped around a large open space in the middle of the clearing, where a rickety goal post provides the only entertainment for the handful of children who live here.

The migrants cook on campfires or wait for warm meals that local residents bring in on an ad hoc basis.

Aid groups and doctors do make occasional visits but there is no organised structure to deal with the recent massive rise in the population. “We were set up here to help around 100 people but we are dealing with over 800,” said Sylvie Cousin, of the Salam charity which is also present in the so-called “New Jungle” in Calais, which lies about 40 kilometres to the west.

Local residents are largely sympathetic to the plight of the migrants, but some are worried by the presence of hundreds of men living rough just yards from their front doors.

They have sent a petition to the town mayor calling for action to stop the “intrusions into gardens, verbal aggression, gunfire, knife fights, noise night and day, and rummaging in bins” that they say is happening in their previously peaceful area.

Yet many of the migrants say they feel much safer here than in the Calais “New Jungle,” where fights often break out between the different ethnic groups living there.

For Dlir Kader, the Iraqi Kurd in Grande-Synthe with his family, the camp will do for the moment. But he is desperate to get to England one way or another as soon as he can.

“We can’t survive here in the winter,” he said.

SEE ALSO: The 'New Jungle' photographed from the sky