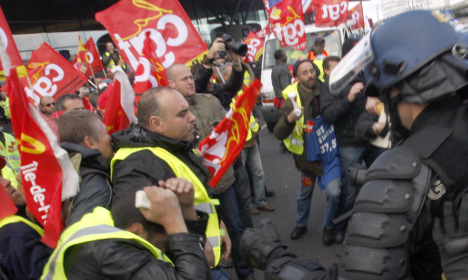 President François Hollande gave a staunch defence of French trade unionism this week and said the suit-ripping of Air France executives should not mean all unionists in France get tarred with the same brush.

“I will not accept that the inexcusable violence committed at Air France becomes the opportunity to hold it against unionism as a whole,” he said. “I believe in the role of representative bodies.”

The president’s words, spoken on the day he opened the latest workers-and-bosses conference, sounded as much an attempt to pacify certain trade unions as it was a ringing endorsement for the French social model.

The previous day the head of France’s biggest and most hardline union, the CGT, which is boycotting this week's conference, warned of the possibility of “social explosion” if Hollande does not do more for workers.

“Be warned it’s going to explode,” said Philippe Martinez (below), who heads up the CGT. (The mean-looking Philippe Martinez head of the CGT. Photo: AFP)

France’s unions are not all hardline

But some believe Martinez and CGT are just trying to flex their muscles at a time when their influence and that of other unions is on the wane.

Leftist unions like the CGT and Force Ouvriere have grown frustrated at being unable to prevent the Socialist government passing several business-friendly reform packages and companies like Air France are pushing ahead with major job cuts.

There are also signs French workers are also moving towards a culture of preferring more direct contact with their bosses to resolve disputes rather than going through unions.

But while the more hardline CGT, which still has firm links to the far left and whose militant protests and crippling public transport strikes are behind much of the negative perceptions of French unions, not all workers representatives are of this ilk.

“Trade unions in France are not one block that you can consider as one union,” Bruno Cautrès, from the Centre of Political Research at Sciences Po tells The Local. “We have far more reformist unions, like the CFDT, which is the second biggest in the country.”

While seemingly endless strikes have helped build the image of the all powerful French trade union, the notion that they block any kind of change is overplayed.

Reforms are still edging ahead, even if the likes of the CGT are doing their best to thwart them.

An agreement in principle was taken on Friday between employee and employer groups to effectively extend the retirement age for about 18 million private sector workers by a year. While France is often seen as the country where trade unions wield the most power, it is actually the country in the OECD which has the lowest rate of union membership – at only 8 percent.

And those who are members are more often than not public sector workers in the areas of transport or education, while there is very little union membership in the private sector.

Nevertheless all workers get to benefit thanks to collective bargaining negotiations, that cover 98 percent of workers.

“We have a strange situation in France, where many French do not participate but they appreciate that unions fight for them,” said Cautres. “When people have trouble at work, they are happy to ask the union to defend them.”

But questions have been asked recently whether or not French trade unions are really defending the well-being of workers or just their own interests.

When workers at the Smart factory in eastern France voted in favour of extending their working week to 39 hours from 35, without any increase in pay, in order to preserve their jobs until 2020, the unions put a block on the plan.

On the face of it, it appeared an attempt by spiteful unions to block a reform that would have guaranteed some job safety to workers at a time when France is suffering from record unemployment.

Those on the right slammed the unions and called on the government to intervene.

But a French lawyer for employment rights told The Local the unions were simply defending the workers' interests.

“This would have meant an effective reduction in salary for workers, but that’s only allowed if the company is in serious difficulties, which Smart isn’t,” the lawyer told The Local.

The dispute had echoes of the 2013 battle by cosmetics giant Sephora to stay open at night on the Champs Elysées. 'There would be real chaos without unions'

Despite workers saying they were keen to earn some extra cash, unions scuppered their chance and won a court battle against Sephora, forcing them to close at 9pm.

But Sylvie Contrepois from France’s national research centre CNRS, said trade unions are right to look at the bigger picture, even if it appears they are ignoring workers’ wishes in the short term.

“Workers very often seek the more immediate and easiest solution because of the pressure and fear of losing their jobs, but the trade unions are looking at a long-term solution, the one that would be the most sensible in the long run,” she told The Local.

Contrepois says French trade unions, for all their faults and perceived refusal to move with the time, remain crucial in France. She insists there really would be “social explosion” without them.

“They play a vital role in the reform process and France is reforming,” she said. “People shouldn’t be clouded by these images [of Air France executives].

“Employers need trade unions because otherwise workers would take things into their own hands and their really would be chaos.” ‘You can’t have a world without trade unions’

For better or for worse trade unions are part of a democratic process in France that has suffered in recent years.

“The quality of democracy in France now is not so good,” Sciences Po’s Cautres says.

“There’s low membership of the political parties, abstention in elections is rising, perceptions of political leaders are very negative, so if you no longer have trade unions, there’s no longer democracy,” he said.

“They do a job, it’s not always positive one, but we can’t have a world without trade unions.”