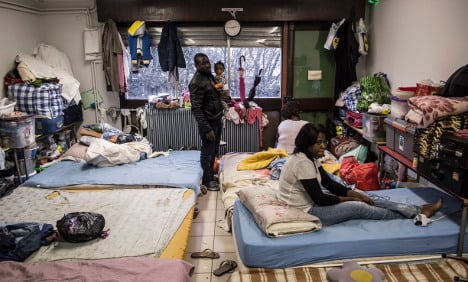 96 percent of France's rejected asylum seekers stay in France. Photo: AFP
The damning report was made public on Tuesday by the top national auditing body, the Accounting Court (Cour des Comptes), and showed France's asylum system to be a sorry sight.
The court noted that France performed poorly compared to its European neighbours when it came to processing times for asylum seekers, who are forced to wait two years on average. The process in Germany, on the other hand, only takes one year.
French authorities have previously said they aim to reduce this waiting time to nine months, a move noted and welcomed by the court, which said that such long waiting times make it difficult to accurately assess the situations of those seeking asylum.
The documents also pointed out that a whopping 96 percent of refugees whose request for asylum is rejected aren't deported. It noted that of the 40,206 people whose request was rejected, only 1,432 people were actually deported.
The report didn't specify what became of those who stayed, though it's likely that many would have stayed to appeal the decision, or headed abroad of their own accord, or perhaps just ended up living on the streets, with authorities losing track of them.
The report also drew attention to France's considerably high rate of application rejections for asylum seekers at 74 percent.
Other points of contention included the high expenditure in social assistance and accommodation for asylum seekers, which was said to be €690 million in 2013, and which is estimated to have increased from 2009 to 2014 by 52 percent.
Prime Minister Manuel Valls was less than impressed with the report, writing in a response published on Tuesday that the authors' reasoning had been “simplistic”.
He noted, for example, that the deportation figures didn't take into account voluntary departures by the asylum seekers or the fact that some succeeded in legally acquiring residency permits after appeal.
But, he added that the efficient treatment of asylum seekers was a priority for the government.
There were around 65,000 asylum seekers in France in 2014, a figure that is expected to remain stable in 2015.