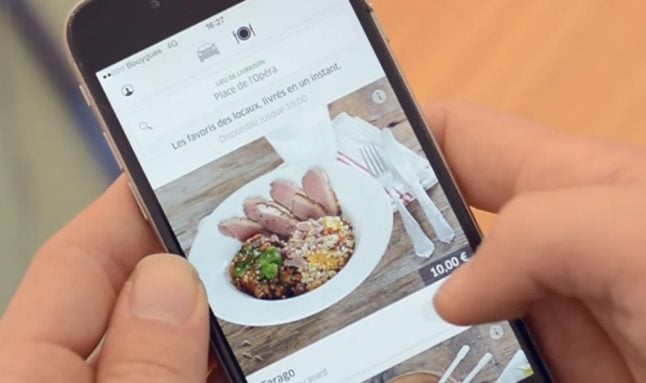 Paris becomes the second city in Europe to get UberEats. Photo: Uber
California-based Uber has announced that it will now be turning its attention to restaurant deliveries in Paris.
The service, called UberEATS, sees customers selecting food from a specially composed menu, then meeting a driver outside their home “within ten minutes” to pick up their lunch.
Like the taxi service, customers won't need to hand over a single centime during the transaction with the money taken directly from their accounts. And they're encouraged not to tip the driver, rather to leave a positive review when happy with the service.
Paris becomes just the second city in Europe, to host the service, after Barcelona and a further eight cities in north America
The move by Uber is understood to be in response to other popular delivery services like Deliveroo and TakeEatEasy, which both launched in Paris this year.
UberEATS will only be available to those living in the in the 2nd, 8th, and 9th arrondissements, as seen in the map below, and is only running between the hours 11.30am and 2.30pm. Delivery will be free as the project is rolled out, but will later come at a cost of €3.
Uber was most recently in the headlines in France after its drivers protested last week to voice their displeasure over their company's aggressive bid to fight off competition by reducing fares in the French capital by 20 percent.
The drivers of the UberX service – which uses professionally licensed drivers – will still get their same earnings for the first six weeks, after which the company expects to see the price drop offset by a spike in customers. Uber is facing stiff competition in Paris. Photo: AFP
The price reductions are understood to be a response to stiff competition from Paris taxi services like Taxi Bleus and G7, both of which are offering discounted rates.
The price reductions came just weeks after France's highest constitutional authority dismissed Uber's challenge of a law that had banned its low-cost UberPop service – which used drivers without licenses to pick up paying customers.
Two Uber bosses were arrested in July and charged with “misleading commercial practices (and) complicity in the illegal exercise of the taxi profession”. They are due to face trial after appearing in court last month.
SEE ALSO: Sympathy for French taxi drivers has run out