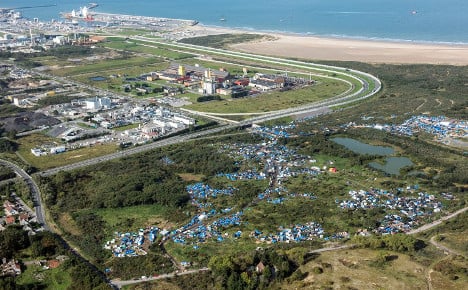 The sprawling New Jungle with the port of Calais in the distance. Photo: AFP

The New Jungle refugee camp in Calais is now home to between 4,000 and 6,000 migrants and refugees, who have made their way up to the northern French port town from the Middle East, Africa and parts of Asia.

French authorities, who earlier this month declared “the time had come to move on” from the Jungle, have given those living in tents or huts until Tuesday 8pm to leave.

Initially they planned to move 1,000 migrants from the southern part of the camp, but it now appears they got their numbers wrong, with aid groups and charities say over 3,000 are facing eviction including 300 unaccompanied children.

The same aid groups who were previously calling for the camp to be dismantled are now calling on authorities not to evict the migrants, simply because there are not enough safe alternatives lined up.

The photos below taken by AFP show how far and wide the camp has spread since police started moving refugees there from other camps around the town last year.

The camp is located on a former landfill site, around three miles from the town centre. The photo below shows the port of Calais in the distance, where many migrants hope to make the trip to the UK.

Each night many set out on the long walk to the port in the hope of sneaking on board a truck. This shot shows the makeshift church (the white building with the black roof)  that has been built on the site. The New Jungle can just be made out in the distance as a ferry arrives at the port of Calais. Huge fences have been erected to stop migrants from making it on to the road that leads to the port.