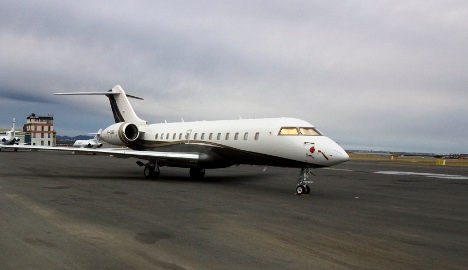 French authorities spend €23,000 on a private jet for refugees, reports claim. Photo: AFP
A jet that can only seat 19 passengers is being used to thin the refugee population in Calais by transferring them to detention centres around France, according to the StreetPress investigative news site.
But the plane isn't transferring 19 passengers at a time – not even close.
Due to the fact that each refugee must be accompanied by two police officers, the plane is actually only taking five refugees at a time from Calais to other towns in France like Metz, Toulouse, Nîmes, Hendaye, and Perpignan.
And it's not cheap either. The private jet has been rented out to the French state on a four year renewable contract at a price of €1.5 million in total each year, the news site reported.
StreetPress, which spent several weeks investigating what it called a “ludicrous system”, reported that the Beechcraft 1900 jet flies up to three times a week and has been doing so for six months.
An anonymous police officer told the site that the system was created to try and “relieve the pressure” on Calais, which is currently home to an estimated 6,000 refugees.
The officer added that the cost didn't take into account extra expenses like jet fuel and workers' salaries, suggesting the daily bill could be as high as €23,000. Frédéric Hochart, spokesperson for the UNSA police union in Calais, said the entire programme was coming at “an enormous cost” for France.
“And what's more, most of the people who are sent away just come back. Today there is a general malaise on the part of the police when it comes to the work that's assigned to them. It's intense, both physically and mentally.”
France's Ministry of Interior has so far refused to comment on the reports in Street Press.