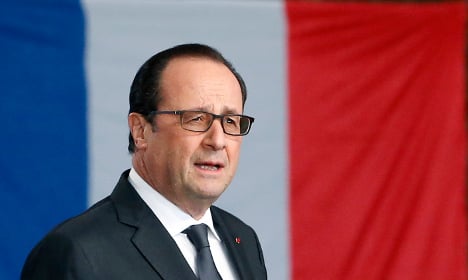 The struggling airline's restructuring plan made headlines around the world earlier this month when executives were manhandled by furious workers, sparking concerns that the violence was just one of the symptoms of France's overall economic and social malaise.

“Some observers always want the pot to boil over and explode. No! The conflict at Air France does not sum up the state of France,” Hollande told RTL radio.

Speaking just hours before the launch of a much-watched annual gathering of unions, employers and government members, a defensive Hollande said the Air France case must not be generalised.

“We must live in a peaceful society. There are always conflicts… How do we overcome them? By violence? Definitely not. By appeasement, and therefore by dialogue.”

On October 5, Air France announced plans to cut 2,900 jobs over 2016 and 2017 after pilots rejected a proposal to work longer hours, sparking fury among employees. Human resources manager Xavier Broseta (above) had his shirt ripped off as he clambered over barriers to escape, helped by security guards, while another executive had his shirt and jacket torn in the scrum.

Hollande said layoffs at the airline could still be avoided “if pilots do what is needed, if management makes proposals, if the ground personnel wakes up to certain realities.”