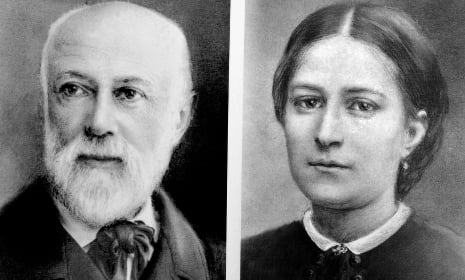 Louis and Zelie Martin were the very picture of charitableness: they helped the sick and dying, gave alms to beggars, ensured hospital care for the very ill and took in a child whose family could not look after him.

They also raised the girl who Pope Pius X is believed to have declared “the greatest saint of modern times”.

The ceremony to canonise the couple comes two-thirds of the way through a global Church council on the family, which the pontiff is keen to hold up as the key social unit for nurturing faith and setting good examples.

“The holy spouses Louis Martin and Marie-Azelie Guerin practised Christian service in the family, creating day by day an environment of faith and love which nurtured the vocations of their daughters,” Francis said during the mass, using Zelie's full first name.

In an interview with Paris-Match this week, the pontiff described the couple as “evangelists… who opened their door” to those in need in a period in which “a certain bourgeoisie ethic was contemptuous of the poor”.

Louis and Zelie, who died in 1894 and 1887 respectively, had nine children, four of whom died at a young age, while the other five all became nuns.

Close to 2,000 Catholics watched the ceremony on big screens in the Basilica of Saint Therese in Lisieux.

“It's a joyful moment,” Annabella, accompanied by her husband and children, told AFP.

“We try to follow their example, even if it's not easy. It's an example of a couple and family life with its joys, misfortunes, the loss of four children. Their example can be a staff to lean on.”

Louis had initially intended to become a monk, but after being rejected because he did not know Latin well enough, he met and fell in love with Zelie in Alencon in Normandy, marrying her three months later in 1858.

The pair first intended to live as brother and sister, but were persuaded to have children by a priest.

Their youngest child, Marie-Francoise Therese Martin — also known as Saint Therese of the Child Jesus and the Holy Face — was born in 1873, became a cloistered nun aged 15 and died of tuberculosis nine years later.

She was raised to sainthood in 1925 by Pope Pius XI and in 1997 made a doctor of the Church by John Paul II — a rare honour signifying that her writings and preachings are useful to Christians.

Her autobiography, “The Story of a Soul”, written as her health deteriorated, is a memoir of her troubled childhood and determination after the death of her mother when she was four to become a nun and dedicate her life to God.

Francis has said he carries one of the saint's books in his black travelling bag and turns to her for help and guidance.

Therese of Lisieux's parents were beatified in 2008 — the first step on the path to sainthood — after the Vatican recognised they had performed a miracle by responding to prayers from the family of a sick Italian child Pietro Schiliro.

But they needed another miracle for their elevation to sainthood.

On March 18, Francis said the pair had performed a miracle by curing a Spanish baby called Carmen. Born prematurely and risking a brain hemorrhage, her parents prayed for the Martins' intercession and the infant survived.

Both Pietro, 12, and Carmen, 7, were present at the canonisation ceremony on Sunday, the first ever of a married couple with children.