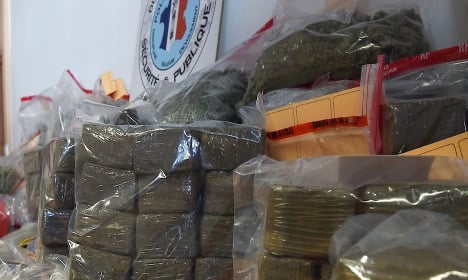 The haul was found in parked vehicles. Photo: AFP

The discovery in the early hours of Sunday is the result of a weeks-long investigation by the National Directorate of Customs Intelligence and Investigations, but no suspects have yet been detained, said sources close to the investigation.

“The drugs were found in empty vehicles, parked on a boulevard, that were obviously being used as temporary and mobile storage places,” Michel Sapin said in a statement. The cannabis was in big bags in the trunks of the vehicles in Paris's 16th district, and altogether, the total value of the 7.1 tonnes seized is thought to be at least 15 million euros ($17 million).

The seizure is the biggest in France over the past two years and is thought to be the largest ever in Paris, said one of the sources, who refused to be named.

Cannabis is the most popular drug in Europe and consumption is on the increase, particularly in France where demand is estimated at around 300 tonnes a year, according to authorities.

Possession or consumption of cannabis represent more than 60 per cent of all offences linked to drugs in Europe. The seizure is the biggest France has seen “in a long time” and the largest ever in Paris, Hollande said as he visited the DNRED's headquarters on the outskirts of Paris.

“I came here to congratulate the customs officials who were able, last night, after working for a long time, to seize more than seven tonnes of cannabis,” said the president.

He said the bust was a huge setback for criminal gangs because “behind these seized bags lie criminal organisations who have links with other organisations, including terrorists.”