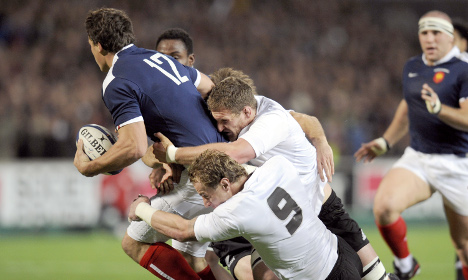 Photo: AFP
1986 – France 16 New Zealand 3
The Test became known as “the Battle of Nantes” and is remembered for a bloodied All Black backrower Wayne “Buck” Shelford taking his place in rugby folklore when he had his ripped scrotum sewn up on the sideline so he could return to combat in the western French city.
Shelford had four teeth knocked out in the match but with a warrior spirit that made him a national hero in New Zealand he played on until he was knocked unconscious late in the match. France won, but the match is remembered for an uncompromising Shelford refusing to back down.
1994 – New Zealand 20 France 23
The Auckland Test that produced “the try from the end of the world” and gave France their only series win in New Zealand.
With time almost up and the All Blacks ahead 20-16, fly-half Stephen Bachop kicked long to pin France deep in their territory. Conventional wisdom said wing Philippe Saint-Andre, now the French coach, should have returned the kick to get France back on attack.
But Saint-Andre caught the All Blacks unawares when he launched a counter-attack from inside his 22 and the ball went through nine pairs of hands in a length-of-the-field sweep which ended with Jean-Luc Sadourny's sensational try.
Saint-Andre called it a “counter-attack from the end of the world” with the expression later dubbed “the try from the end of the world”.
The All Blacks have not lost in 35 Tests at Eden Park since then.
1999 – France 43 New Zealand 31
It was a World Cup semi-final at Twickenham, the All Blacks were red-hot favourites and when they raced to a 24-10 lead at half-time they were mentally rehearsing for the final against Australia.
But as is so often the case, the unpredictable French would not give up. They turned on the flair with a withering burst of 33 unanswered points that left the tournament favourites devastated.
Fly-half Christophe Lamaison posted 28 points including a try, two drop goals, four conversions and three penalties.
2007 – France 20 New Zealand 18
The Cardiff game became New Zealand's biggest World Cup disaster and their earliest exit — out in the quarter-finals.
The signs were similar to 1999 with the All Blacks overwhelming favourites and underestimating the opposition.
This time they raced to a 13-0 lead, felt they had the game in the bag, and mentally switched off while France rallied.
When Yannick Jauzion scored the match-winning try with 10 minutes remaining it woke up the All Blacks. But despite a sustained attack on the French line they could not break an heroic defence.
2011 – New Zealand 8 France 7
New Zealand, desperate to win the World Cup for the first time in 24 years and on home ground, met France in pool play and cantered home 37-17.
Four weeks later they met in the final in Auckland and France rose for the big occasion.
Tony Woodcock's try was the only score in the first half before Stephen Donald stretched the lead to 8-0 with a 46th-minute penalty.
A converted try to Thierry Dusautoir immediately after closed the gap to one point and then began a relentless 33 minutes of trench warfare.
With both sides desperate to win and neither willing to take a risk, gains were made in centimetres.
It was not pretty but with a world title at stake superiority mattered more. When the clock eventually ticked past 80 minutes and Andy Ellis kicked the ball out to end the game the All Blacks knew it was possible to beat France in a crunch match. 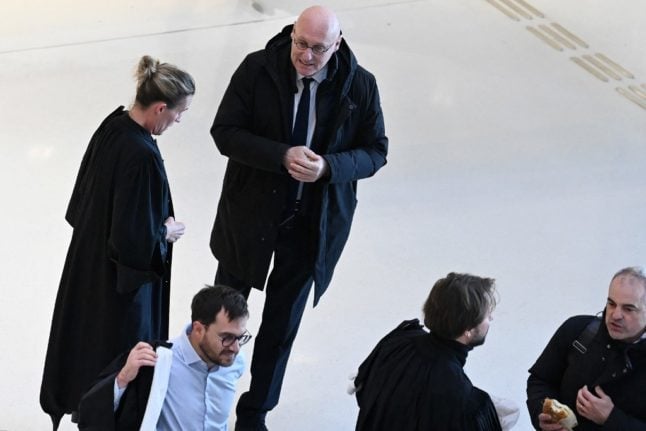 Fédération Française de Rugby (FFR) president Laporte, 58, was convicted after a French court ruled he showed favouritism in awarding a shirt sponsorship contract for the national side to Mohed Altrad, the billionaire owner of Top 14 champions Montpellier. He was also banned from holding any rugby post for two years. Both are suspended pending an appeal, which Laporte’s lawyer said was imminent.

Laporte later stepped down from his role as vice-chairman of the sport’s global governing body, World Rugby, pending a review by the body’s ethics officer.

“World Rugby notes the decision by World Rugby vice-chairman Bernard Laporte to self-suspend from all positions held within its governance structures with immediate effect following his conviction by the French court in relation to domestic matters, and pending his appeal,” World Rugby said.

“While acknowledging Laporte’s self-suspension and right of appeal, given the serious nature of the verdict World Rugby’s Executive Committee has referred the matter to its independent ethics officer for review in accordance with its integrity code,” it added.

Resignation call
Laporte faces problems on the domestic front, too, with Florian Grill, who narrowly lost to him in the 2020 election for federation chief, calling for Laporte and the entire board to stand down.

“It is unheard of in rugby, this is an earthquake,” Grill told AFP. “We have never before seen a president of the federation condemned to two
years in prison, even if it suspended.

“We think the 40 members of the board of directors should draw the obvious conclusions and resign.”

French Sports Minister Amelie Oudea-Castera said the sentence was an “obstacle for Bernard Laporte to be able, as it stands, to continue his mission in good conditions” as federation president, and called for a “new democratic era to allow French rugby to rebound as quickly as possible and sufficiently healthy and solid, with a governance by the federation that will have the full confidence of the clubs”.

The court found that Laporte ensured a series of marketing decisions favourable to Altrad – who was given an 18-month suspended sentence and
€50,000 euro — in exchange for a €180,000 image licensing contract that was never actually carried out.

Altrad’s lawyer said he would study the decision before deciding on whether to appeal.

At the trial’s close in September, prosecutors said they were seeking a three-year prison sentence for Laporte, of which he should serve one behind bars, and the two others on probation.

The friendship and business links between Laporte and Altrad are at the heart of the case.

It goes back to February 2017, when they signed a deal under which Laporte agreed to appear at Altrad group conferences, and sold his image reproduction rights, in return for €180,000.

But while that sum was  paid to Laporte, prosecutors claim that he neveractually provided the services he signed up for.

Laporte did, however, make several public statements backing Altrad and, in March 2017, signed the €1.8 million deal with the businessman making his namesake firm the first-ever sponsor to appear on the French national team’s jerseys.

The Altrad name and logo still features on the shirts thanks to a follow-up deal negotiated by Laporte in 2018 and which prosecutors say bears all the hallmarks of corruption. It is also on the All Blacks’ national squads’ shirts, and New Zealand Rugby is reportedly seeking an urgent meeting with company officials following the court ruling.

He was convicted for intervening with French rugby’s federal disciplinary commission to reduce a fine against the club from €70,000 to €20,000 after several telephone calls from Laporte.

While prosecutors saw this and several more incidents as proof of illicit favouritism, Laporte himself had claimed there was no “cause-effect relationship”.

On the last day of the trial in October, Laporte’s lawyer Fanny Colin accused the prosecution of “confirmation bias” by “taking into account only elements backing their original assumptions”.

The verdict comes only nine months before the Rugby World Cup kicks off in France on September 8, 2023, with matches played in nine stadiums across the country.