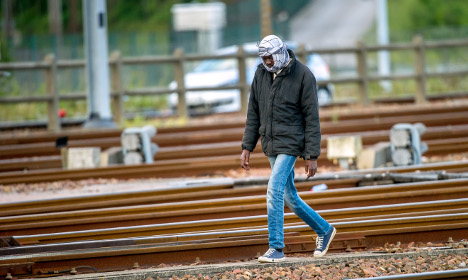 A refugee walking on the train tracks near Calais. Photo: AFP
The person was hit in Coquelles near the northern port of Calais by a train that had just crossed the Channel from the UK.
Authorities told AFP that it was impossible to determine the victim's age, sex, or nationality as the “body was shredded over a distance of 400 metres”.
The news comes just one day after a Syrian man was killed after being hit by a car near Calais.
The death toll of refugees killed in France whilst trying to make their way to Britain is now at 16 since June.
Train drivers who work for Eurotunnel said recently they were so overcome with fear and anxiety over the deaths of refugees that they could no longer do their job.
Around 4,000 people, mostly from East Africa and the Middle East, are camped around Calais, hoping to reach Britain, with around 1,000 more gathered around the port of Dunkirk, around 40 kilometres (25 miles) away, also trying to reach England.