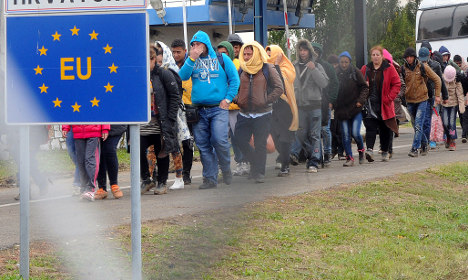 French President Francois Hollande has tried to put the record straight insisting that France is not being invaded by refugees as the far right would have people believe.

Hollande blasted those trying to kid the population into believing they will soon be overrun by refugees.

During a speech in Brussels, where EU leaders had gathered Hollande said: “In terms of numbers, today, France is not subject to an influx of refugees and those who argue that we are being invaded are manipulators and falsifiers, who do this only for political reasons, to scare.”

As the refugee crisis reached a head after the photo of the drowned Syrian boy stirred emotions around the world, France was criticised for not acting to take in more refugees.

That prompted many some mayors to openly refuse to accept refugees, while many politicians on the far right and right, talked of the threat to France’s social cohesion.

Le Pen said France is suffering under a “migratory submersion” and even opposition leader and former president Nicolas Sarkozy recently compared the influx of migrants to “a burst water-pipe”.

But on Thursday Hollande tried to set the record straight.

“Where do all the refugees go today? Essentially to Germany, Austria and Sweden. Since beginning of the year Germany has taken in more than 500,000 people and the country that does the most for refugees based on the size of its population is Sweden,” said Hollande.

It emerged than many refugees actually snubbed France’s invitation to seek asylum, preferring to try to obtain residency elsewhere.

After agreeing to take in 1,000 over one weekend to ease the pressure on Germany, Paris dispatched a team of immigration officials to Munich to convince refugees to seek asylum in France.

However less than 600 arrived on organised buses and no more are expected for the moment, the immigration office said, refusing further comment.

Hollande has being trying hard to tackle the more xenophobic rhetoric that some on the right have been evoking, in particular former minister Nadine Morano who said France was “a country of white race”.

“The Republic knows no races or skin colours,” said Hollande.