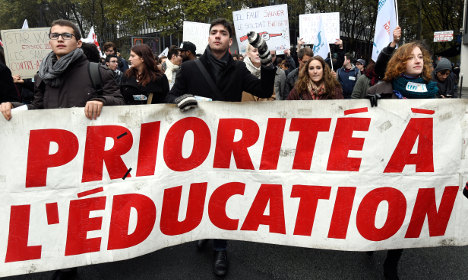 Students protest in Paris over lack of funding as well as many other gripes.

After farmers, taxi drivers, Air France staff, and police, on Friday it was the turn of students to take to the streets in protest.

Several student unions called on members to march through Paris to show their displeasure at everything that is wrong with the creaking French university system.

Overcrowding – there are 65,000 more students this year, lecturers that are not replaced and researchers struggling for funding are just three of the issues that brought hundreds of students out on the streets of Paris.

They marched to the finance ministry to demand more funding. Student unions claim there’s a short fall of around 30,000 teachers and researchers, needed to give adequate supervision to teachers.

“It's the states responsibility to invest and they aren't. These cuts have an impact on students and we are feeling it especially harshly this year,” Sacha Feierabend, the secretary general of UNEF student’s union told The Local.

Students have had enough of overflowing university classrooms. They're marching in Paris today in protest. pic.twitter.com/xLfm7V0m7x

“We are mainly protesting the budget cuts. We have a big public university system, low fees, and little private investment,” he said.

“We want a rise in the budget and that's our main goal. That is why we are on the streets. And we will be out here for weeks, months if we have to. Today's march is not a one off,” Feierabend said.

Students revealed just how overcrowded their lecturers are by setting up a Tumblr account where people could post photos of the classrooms.

Images should students cramped onto steps or even forced to listen to the lectures from outside.

And last year a similar account was set up to show the sorry state of university buildings that appeared in desperate need of upkeep and investment.

The 2016 budget for higher education is set at €25.6 billion, but with the rise in student numbers unions say it needs to be increased.

Selim, a 21-year-old law student at the University of Nanterre, says it's painfully obvious that the budget is insufficient.

“Here in France, there is so much failure among first year students, 60 percent, they say,” he told The Local.

“Some of my law lectures have 1,000 students in the classes. There shouldn't be more than 30. These kinds of classes shouldn't be taught in lecture theatres.”

“France should be more like Sweden or Finland, where the funding per student is far higher.

“France has the lowest student funding among the world's developed countries. It's not good enough.”