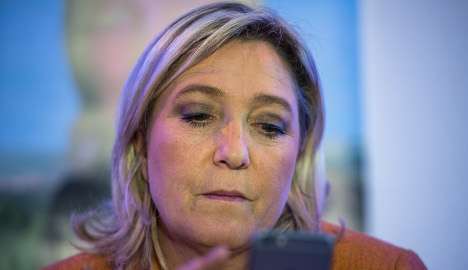 Marine Le Pen's run up to regional elections is being hampered by legal woes. Photo: AFP

The National Front (FN) chief refused to show up for a court appearance on Tuesday over charges that her party had conspired in fraud during the last parliamentary election in 2012.

Le Pen told AFP in a written statement on Wednesday that she refused to appear as her party had filed a complaint against the judges several days earlier.

She did not give details of the complaint, but a source with knowledge of the affair said Le Pen had accused the judges of political bias.

A few short hours later, news emerged that the long-running legal battle with her father, party co-founder Jean-Marie Le Pen, was heating up yet again.

He was booted out of the party earlier this year after rehashing familiar comments about Nazi gas chambers being a “detail” of history and saying France should improve ties with Russia to save the “white world”.

He launched a series of successful legal appeals against the decision but appeared to have been definitively expelled by the party's disciplinary board on August 20.

But on Wednesday, his lawyer announced the 87-year-old would once again take the FN to court in a bid to be reinstated.

As part of the challenge, excerpts of which were published by L'Opinion magazine, the elder Le Pen is also seeking two million euros ($2.3 million) for the damage done to “his dignity, his honour, his reputation and his political activity”.

These legal headaches come at an awkward time for Marine Le Pen, who is heading into crucial regional elections in December, the last ballot before presidential polls in 2017.

She is also due in court next Tuesday, charged with inciting racial hatred in 2010 by likening Muslims praying in the street to the Nazi occupation of France.

Despite all the controversies, the party is performing strongly in opinion polls thanks to a slumping economy and broad loss of faith in mainstream politics.

Pollsters say it has a good shot at winning the northern Nord-Pas-de-Calais-Picardie region.

Marine Le Pen has denounced the cases as attempts by the political establishment to thwart her rise to power.

Party treasurer Wallerand de Saint-Just, who heads the FN's electoral list in the Paris area for December's regional elections, has been charged.

“We are innocent of all the accusations against us,” the treasurer has said.

The legal travails do not stop there. The party is also under investigation by the European Parliament for a separate fraud case involving €7.5 million ($8.1 million) in salaries paid to EU parliamentary assistants.