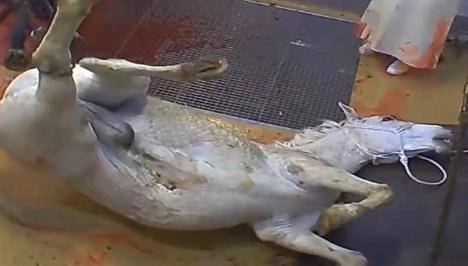 A scene from the shocking abattoir video from southern France. Photo: L214
Cows writhing while suspended in the air after having their throats cut, pigs squealing in panic as they're being gassed, and horses that flail around after being shot.
These were the scenes published on Wednesday by animal rights group L214, taken from over 50 hours of fixed-camera footage taken by “someone who had inside access” to the Abattoir d'Alès in southern France.
“These animals are dying in terrible conditions, it's absolutely awful,” Brigitte Gothière, co-founder of L214, told The Local on Thursday.
You'd be hard pressed to disagree. The video is embedded below and contains extremely graphic images. Viewer discretion is advised.
The video quickly went viral in France after being revealed by Le Point news site, garnering hundreds of thousands of hits on YouTube over the day.
Not long after the clip was released, the town's mayor Max Roustan closed the abattoir down, saying that he was “moved by the images” and that he would close the slaughterhouse until the results of an investigation were in.
Gothière from L214 welcomed the news, but said there is still a lot of work to be done.
“Of course, we are glad that they've closed, but we are hoping this goes further, we hope it kicks off a public debate on the closure of all abattoirs in France,” she said.
“Every time videos like this come out, people say oh la la, but the truth is that this is how abattoirs function. The abattoir in Alès is no worse than the others in France.
“We hope to change people's mentality when it comes to the practice of eating animals, and hope to move towards a France where people don't eat animals when we don't need to.”
The group passed the footage to an expert vet for analysis, and then issued a formal complaint about the abattoir's cruelty, as well as its lack of basic health and safety and ignoring basic legal procedures about how the animals are slaughtered.
The group noted on its site that the abattoir's workers didn't follow protocol on several occasions during the 4-minute film.
For example, when animals regained consciousness after being shot with a stun gun, workers sometimes chose to begin the butchering process rather than administering another shot with the gun.
The group also noted that pigs were only gassed for around 30 seconds, even though the law says it should be at least 2 minutes to ensure they don't wake up before being killed.
Social media users took to Facebook and Twitter to slam the abattoir's practices as “barbaric” and “revolting”.
The user below listed the clip as among the worst he'd ever seen.

This is one of the worst things I have ever seen. (Trigger warning: extreme violence, torture of animals.) https://t.co/uBgnCYGadV

The abattoir, which processes 3,000 horses, 20,000 pigs, 40,000 sheep and 6,000 cattle each year, refused to speak to media about the scandal.
The footage was jumped upon by the far-right National Front, who criticized the Halal ritual of slaughtering animals by slitting their throat as “torture”
The animals that pass through the abattoir are slaughtered using both the classic and Halal methods, with around 30 percent of cows and 40 percent of sheep destined for the Halal market.
The animal rights group insisted that the method of slaughter was irrelevant, and that it detracted from the real issue of animal cruelty.
“Whether it's using the Halal ritual or not, the methods of this abattoir are shocking. Cows who have been badly stunned and pigs asphyxiating has nothing to do with Halal,” L214's spokesperson told L'Express.