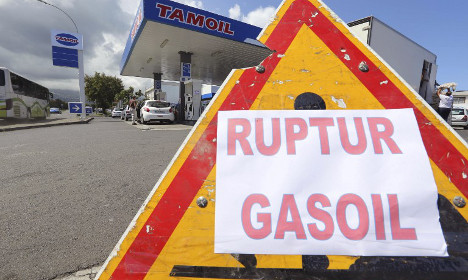 France and diesel are falling out of love. Photo: AFP

The country's environment minister also said that energy giant Engie, which is partly owned by the state, was going to stop investing in the development of coal-fired power plants, the biggest source of man-made CO2 emissions.

According to a statement published late Wednesday, the government will increase taxes on diesel over the next few years and at the same time reduce those on petrol, with the aim of bringing the price of both fuels to roughly the same level.

A huge number of cars in France run on diesel, which is taxed at some 20 cents cheaper per litre than petrol and represents around 80 percent of fuel volumes sold in the country.

This has led to more and more cars running on diesel “which has triggered legitimate concerns among many French people about the impact on air quality,” the government said.

The car industry argues that diesel spews out less heat-trapping carbon dioxide than petrol, but without sophisticated controls, the fuel may also emit harmful levels of poisonous nitrogen oxides and lung-clogging particles.

Revelations that Volkswagen equipped 11 million of its diesel cars worldwide with software that can switch off those pollution controls — except when it detects it is undergoing official testing — have sharpened the focus on diesel's risks.

In its statement, the government said it would double the subsidy given to owners of old diesel vehicles who change their cars to 1,000 euros ($1,140).

The measures come ahead of the UN's November 30-December 11 climate change conference in Paris, which aims to secure a pact on greenhouse gases that would limit global warming to two degrees Celsius (3.6 degrees Fahrenheit) above pre-industrial times.