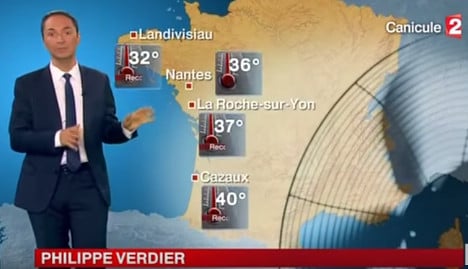 Philippe Verdier, who has been placed on "forced holiday" after questioning climate change. Photo: France 2/YouTube

Philippe Verdier, has become a well known face in France thanks to his nightly weather bulletins to around five million French people on the channel France 2.

The “Monsieur Météo” was conspicuous by his absence this week after apparently being sent on a “forced holiday” by his bosses, with his future as a weatherman up in the air, as he stands accused of being a climate sceptic.

Verdier has been taken off air after releasing a book accusing the world’s leading climatologists and political leaders of using dodgy data to convince the public about climate change. In a promotional video Verdier says: “Every night I address five million French people to talk to you about the wind, the clouds and the sun.

“And yet there is something important, very important that I haven’t been able to tell you, because it’s neither the time nor the place to do so,” he said.

“We are hostage to a planetary scandal over climate change – a war machine whose aim is to keep us in fear,” says Verdier who denies he is a climate sceptic.

Verdier says there are scientists who are “manipulated and politicised… who are serving only their image,” a “blinded” media and “commercial NGOs and religions looking for new creeds”.

That was enough to persuade Verdier’s bosses to take him off air. While rumours of what punishment he could face swirl around the French media, France 2 has so far refused to comment.

“He’s on holiday,” the channel said, without specifying when he would return.

For his part Verdier told RTL radio “I received a letter telling me not to come. I'm in shock.”

His book, heavily criticised by Le Monde newspaper for being full of “errors,” also includes a chapter about the positive impact of climate change on France, in which he evokes better wine harvests and lower death rates in winter and warmer weather attracting tourists.

In it he writes: “We are undoubtedly on a plateau in terms of warming and the cyclical variability of the climate doesn’t not allow us to envisage if the natural rhythm will tomorrow lead us towards a fall, a stagnation or a rise (in temperature).”

SEE ALSO: What France will look like in the year 2050 Perhaps Verdier would have got away with his outspoken statement if France and the French government hadn’t been in the middle of preparing for the crucial UN climate change conference in December.

The success of the conference is seen as vital not just to François Hollande’s presidency but to the image of France itself.

Much of the work that goes into preparing for the conference is being carried out by the Intergovernmental Panel on Climate Change, an organisation that Verdier has taken particular umbrage against.

Verdier also wrote a critical letter to Hollande, lambasting the president for pretending to save the planet.

It was published by a French news site which further riled his bosses at France 2.

Verdier accepts that he has caused problems for his employer given that the state owns France Televisions.

He said he was moved to write the book after France’s Foreign Minister held a meeting of weather presenters and asked them to stress climate change in the broadcasts.

“What is shameful is this pressure placed on us to say that if we don’t hurry, it’ll be the apocalypse,” he said.