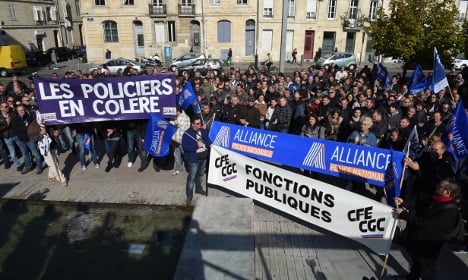 Policemen and French Interior ministry public employees demonstrate to call for better working conditions. Photo: AFP
Police officers protested en masse in front of the Ministry of Justice at the Place Vendôme in Paris on Wednesday, as well as in front of courthouses across the country.
The officers' frustration did not fall on deaf ears, with Prime Minister Manuel Valls coming out swiftly to announce a raft of new measures to appease the force.
And President Francois Hollande highlighted “the difficult, courageous and effective work by police, gendarmes and all security forces” in his weekly cabinet meeting, according to government spokesman Stephane Le Foll. (Police demonstrating in Place Vendôme on Wednesday set off smoke bombs. Photo: AFP)
Hollande said he would meet police unions next week.
“I hear the anger of the police, I hear their malaise,” said Valls, announcing heavier sentences for possession of weapons and plans to simplify criminal procedures.
He also said more prisoners should have police escorts when on a leave of absence and that permission for leave should not be given without “proven necessity.”
There have been several cases of prisoners escaping during leaves of absence in recent weeks, including a convict who had been given permission to go on a mountain-biking trip with other prisoners.
Another man, serving a sentence for rape, escaped during a leave of absence only to rape and stab a hiker in the eastern Alsace region.
Wednesday's demonstration came after officers complained that they had been forgotten and their jobs have become impossible after they were treated as heroes of January's jihadist attacks in Paris.
“The police, heroes in January, have been forgotten,” said Jean-Claude Delage of the police union Alliance.
Wednesday's demonstrations were prompted after an officer was seriously injured earlier this month when he was shot in the head by a reportedly radicalized inmate who had been granted a temporary leave from prison earlier in the year, but who never returned. (Police officers search for evidence after the shoot-out. Photo: AFP)
Unions at the time called on the government to explain why such a dangerous individual was allowed out of prison, with police union Alliance saying that Justice Minister Taubira “must be held accountable for the fact that our colleague is fighting for his life and it could have been avoided”.
Officers have also complained about suffering more often at the hands of violent criminals, with attacks against police officers having risen by 40 percent since 2008, according to Nicolas Comte, a police union leader with Unité SGP Police FO.
“The justice system hasn't managed to grasp this phenomenon,” he told French channel BFM TV, saying that punishments simply did not match the crimes.
It's perhaps no surprise officers are feeling overworked. Since the terror attacks in Paris in January, the government has been running a security plan (Plan Vigipirate) that has seen officers stationed around the clock in front of sensitive areas like mosques and Jewish schools.
Compte added that officers have not been paid for a total of 20 million hours of overtime. “People need to understand the police are not doing well. Since the January attacks and the implementation of Plan Vigipirate, colleagues have been working hours without end,” said Comte.
“They are in a state of fatigue and working under constant pressure.”
And the police force faces several challenging months ahead.,
Not only is there the two-week COP21 climate summit in Paris in December, which require huge manpower, there is also next years Euro2016 tournament that will see thousands of football fans from around Europe descend on the country.