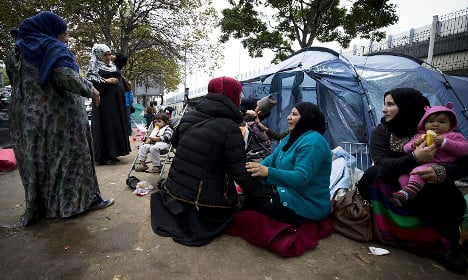 Refugees at a makeshift camp in Paris. Photo: AFP
The memo did the rounds on France's social media scene after it had circulated among SNCF staff.
It noted that the influx of refugees in France was an “exceptional” circumstance and that staff must take this into account.
In particular refugees shouldn't have to pay any reservation fees for their seats when they turn up for trains in large groups without tickets.
News of the memo was jumped on by France's right and far right who accused SNCF of giving refugees free tickets and of “doing the dirty work of people smugglers”.
Xavier Bertrand from Nicolas Sarkozy's centre-right Les Républicans describing the SNCF's stance as “intolerable” and “impossible”.
Members of the far-right anti-immigration party the National Front wasted no time sharing their derision, with several party members taking to Twitter to note that “others” were being put before the French.
The party's leader Marine Le Pen wrote to SNCF chief Guillaume Pépy blasting SNCF for making the situation worse in the northern port city of Calais and effectively “doing the dirty work of people smugglers.”
But when confronted about the plan on Wednesday, an SNCF spokesman told France TV Info that there weren't any “free tickets” being handed out.
“The subject is extremely complicated,” he said, adding that the “vast majority” of refugees actually travel with tickets they've paid for, often with money given to them.
“But we sometimes come across people without a ticket or who maybe don't have the right one. And it's not always easy to get the right ticket to the right destination when you don't speak French.”
For people on the train in this situation, controllers have been told to give them a “zero euro” reservation ticket and to allow them to continue their journey, rather than kicking them off the train.
“We are not talking about chronic fraudsters,” SNCF spokesman Christophe Piednoël.
He stressed that refugees would still be controlled and could potentially be fined “like everyone else”.
“What's been put in place is the possibility for free booking in order to attribute numbered seats to the refugees so they remain grouped together and they can avoid any risk of conflict that may come if they'd taken seats reserved by other passengers.”
“These are people are in exceptional circumstances, and are often fatigued or in distress,” the SNCF spokesman told AFP. “It is normal to handle them with humanity.”