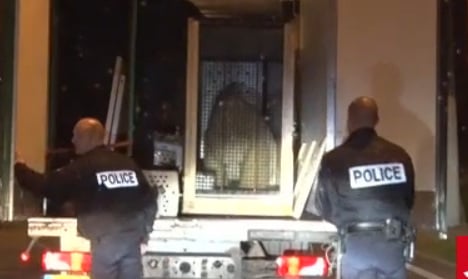 A refugee is escorted out of the vehicle by police as the polar bear, right, watches. Photo: Yorkshire Wildlife Park

The refugees were making a desperate bid to reach the UK when they crept into a stationary truck in Calais at 4am.

However, when they opened the rear doors of the truck they surely weren't expecting to find Nissan, a 22-month-old polar bear that was being transported (in a cage) to the Yorkshire Wildlife Park in Doncaster. Passengers in a car behind filmed the sequence, later alerting police who were soon on the scene. Local officers escorted the men out of the vehicle.

A zoo spokesperson told the Sun newspaper in the UK that the bear's journey from Moscow and through Germany had gone “very well” up to that point.

“The staff couldn’t believe it. Fortunately Nissan was safely contained in his travel crate,” Simon Marsh from the zoo said.
“He is only 22 months old but he is a fair size and let out a roar when his peace was disturbed. But the men still jumped in without seemingly any fear.”
By Wednesday, the park shared a video showing that Nissan had safely made it to the park (see below).