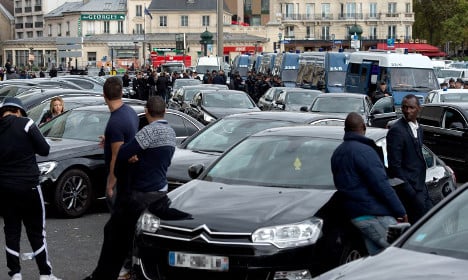 Uber drivers gather for a peaceful protest on the Place de la Porte Maillot in Paris. Photo: AFP
First it was the French taxi drivers protesting against Uber, now it's the Uber drivers protesting against their own bosses.
That's the way it works in France, for better or for worse.
Drivers of the California-based ride-booking service gathered out the front of the Uber headquarters in Paris on Tuesday morning to voice their displeasure over their company's aggressive bid to fight off competition by reducing all fares in the French capital by 20 percent.
They threatened to boycott the use of the app all day on Tuesday, complaining that the minimum price for a ride had now dropped from €8 to €5 (from $9.10 to $5.70).

Around 300 drivers had also gathered in Porte Maillot on Monday evening.
The drivers of the UberX service – which uses professionally licensed drivers – will still get their same earnings for the first six weeks, after which the company expects to see the price drop offset by a spike in customers.
But, rather than wait and see what happens with their earnings, drivers have taken to the streets in protest. They've even formed a union, reported France Info radio.
“Uber's near monopoly allows it to play around with the flat rate without a care for the livelihoods of its chauffeurs,” Mohammed Rabi, spokesman of the union, told the channel on Monday evening. Uber is facing stiff competition in Paris. Photo: AFP
The price reductions, announced on Thursday, came just two weeks after other Parisian taxi companies unveiled plans to make their journeys cheaper.
Taxi Bleus announced a €10 cap on all night journeys, while G7 said anyone between the age of 15 and 25 could ride at a 20-percent discount.
It is also competing with Paris-based start-up Heetch, which offers cheap fares for night-owls and party goers looking to get home cheaply after a night out.
Uber's move also came two weeks after France's highest constitutional authority dismissed Uber's challenge of a law that had banned its low-cost UberPop service – which used drivers without licenses to pick up paying customers.
Two Uber bosses were arrested in July and charged with “misleading commercial practices (and) complicity in the illegal exercise of the taxi profession”. They are due to face trial after appearing in court last month.
The existence of UberPop has prompted violent protests by taxi drivers across France, many of whom are furious to be undercut after having to pay for their own official licenses.
In June this year, some Uber passengers were even targeted, including one high profile incident that left US rockstar Courtney Love blasting the French president after being caught up in the melee in Paris.
Uber has become one of the world's most valuable startups, worth an estimated $50 billion (€44.5 billion), as it has expanded to more than 50 countries.
SEE ALSO: Sympathy for French taxi drivers has run out