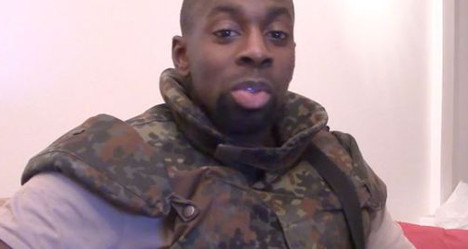 Nine months after the bloody terrorist attacks in the French capital investigators have revealed that they have found an important piece of evidence on Coulibaly’s computer.

The email message includes a series of instructions, which appears to confirm the existence of a commander abroad, who ordered the Paris attacks, which also saw 12 people killed at the offices of Charlie Hebdo.

According to BFM TV Coulibaly received the message on to one his computers on January 8th at 5.21pm – hours after Coulibaly had killed a police officer in Montrouge.

It was deleted at 7pm.

The author of the message advised Coulibaly to “act alone” although it does mention trying to contact “zigoto”, which investigators believe could be a pseudonym for the Kouachi brothers, who had already attacked Charlie Hebdo the previous day and were on the run.

But it appears to leave the choice of target up to Coulibaly telling him to target somewhere in the “grand ceinture” ring around Paris “if there’s a problem in the centre”.

In the end Coulibaly attacked the Hyper Cacher store at Porte de Vincennes on the south eastern edge of Paris on January 9th. He killed four before being gunned down when police stormed the store.

According to BFMTV the author of the email used a fake account that passed through a server in the US. He or she has not been identified, although investigators believe they are based in Syria.

Back in may Paris prosecutor François Molins already evoked the theory that Coulibaly had received instructions from abroad.

In a posthumous video released after the attack Coulibaly had claimed to be a member of Islamic State (Isis).

Amédy Coulibaly’s partner Hayat Boumeddiene is the subject of an international arrest warrant. She was caught on CCTV boarding a flight to Turkey in the days before the terror attacks.

She is believed to be in Syria.