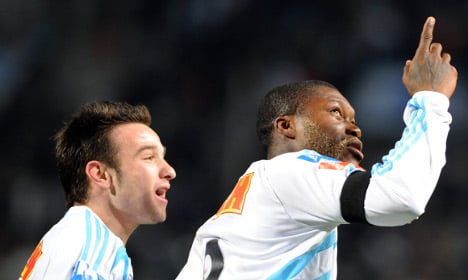 The four, including Cissé, are being questioned by police over the “attempted extortion of money” from Valbuena, who is currently playing with Olympic Lyon.

Cissé was arrested by police early on Tuesday morning.

According to L'Express news site, Cissé, a former French international striker and household name in the UK after spells with Liverpool, Sunderland and QPR, may soon be released without charge if any wrongdoing on his part is ruled out.

The connection of Cissé to the other arrested men is not clear, nor is the reason why he has come under suspicion of being involed.

The other three men were arrested in the Bouches-du-Rhône and Oise départements, and are suspected of masterminding a blackmail plot against Valbuena.

It is believed the plan involved telling Valbuena they were possession of a sex tape made by him and his partner and were threatening to make it public unless the player paid up.

A source close to the investigation told French media that they have not confirmed the existence of the tape.

Lawyers for Valbuena, 31, told AFP they would not comment while the investigation was under way.

Cisse himself made a complaint to police in 2008 after claiming he was the target of a blackmail attempt involving a sex tape while he was playing for Marseille.

The flamboyant Cisse is currently appearing as a contestant on France's version of “Strictly Come Dancing”, “Danse avec les stars”.

The judicial police at Versailles are in charge of the investigation.