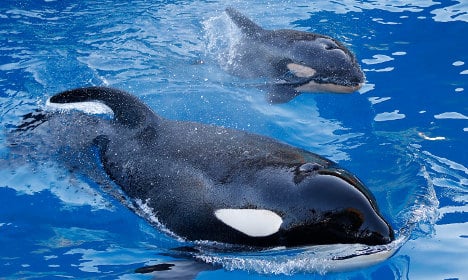 A file image of a killer whale at Marineland. Photo: AFP
The effects are still being felt after devastating floods hit southern France last weekend, when 20 people were killed and many towns along theCôte d'Azur were ravaged.
Marineland in Antibes, the biggest sea park in Europe, was particularly hard hit by the 2.5-metre waves, announcing soon after the floods that it had lost sea lions, sharks, turtles and smaller farm animals.
On Monday, the park announced the death of a killer whale too.
“The entire team is extremely sorry to announce the death of Valentin, a killer whale that was born on site at the park,” the statement read.

It added that there are still many unknowns about the cause of death of the animal, which was born on site in 1996, but that a team of veterinarians was doing all it could to learn more.
The park said it had undergone “extremely difficult times” during the past week, and was concentrating on securing the infrastructure around the animals' enclosures.
Animal activists had criticized the park soon after the floods, questioning the zoo's heads about the health of the killer whales.
Animal rights groups like the Brigitte Bardot foundation accused the park of being secretive and hiding information about the whereabouts and health of “missing” killer whales.
Marineland's manager, Bernard Giampaolo, told 20 Minutes news site last week that “our killer whales are not dying on the parking lot as some people are saying”.
The park has said that it won't be open again to the public until January next year at the earliest.
Social media users took to Twitter to share their thoughts, ranging from condolences for the whale to anger at the marine park.

They should never have been there anyway. Park's killer whale dies after French floods http://t.co/VsRcJxOmbN via @TheLocalFrance

@TheLocalFrance time for Marineland to shut down for good! It is simply a cruel circus set in water