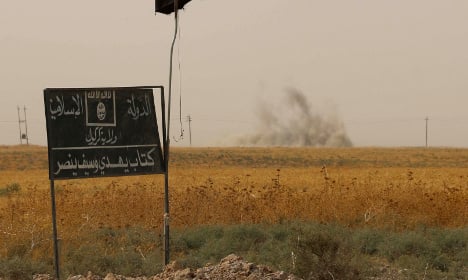 A file picture taken on September 11, 2015, shows smoke rising in the distance behind an Islamic State (IS) group flag. Photo: AFP

French air strikes in Syria have probably killed French jihadists, a source in the delegation of Prime Minister Manuel Valls said on Monday during a visit to neighbouring Jordan.

The country's defence ministry however has not confirmed the death of any French nationals.

“The strikes have killed jihadists. There might well be French jihadists among them,” the source said.

The source said he could not confirm a figure of six French jihadists killed which he said probably came from a Syrian non-governmental organisation.

France's defence ministry said on Sunday that French citizens were in a training camp for Islamic State group jihadists that was hit by French air strikes last week.

“We targeted a training camp where there were foreign Daesh fighters trained to come and attack us in France,” a ministry source said, using another acronym for IS.

Valls said that France would strike anyone planning attacks on its soil, regardless of nationality.

“We do not ask what passport this or that person has but we strike anyone preparing attacks against France.”

French intelligence learned of the presence of the foreign fighters at the camp by questioning jihadists linked to Syria, the source added.

The Journal du Dimanche (JDD) newspaper first reported the presence of “several French citizens” and other francophones among the hundred or so jihadists at the sprawling camp, which lies five kilometres (three miles) southwest of Raqa, the Syrian town widely considered to be IS's centre of power.

The strikes overnight Thursday were the second time that French jets have targeted IS camps.

On Sunday a source in the country's defense ministry said: “We targeted a training camp where there were foreign Daesh fighters trained to come and attack us in France,” using another acronym for Islamic State.

President Francois Hollande says France is acting in “self-defence” by carrying out air strikes in Syria.

French authorities have stepped up efforts to fight radicalisation since a series of jihadist attacks by gunmen left 17 dead in January in Paris.

France has been named as a priority target by IS militants and several other attacks have been foiled, amid fears that battle-hardened jihadists could return from Iraq or Syria to launch attacks on home soil.