Pierre Plissonnier is led away to buy a new suit. Photo: AFP
The six men arrested work for the Cargo Air France division but are not elected union officials, one of the sources said.
Four were arrested “without incident” early Monday at their homes outside Paris, and a fifth shortly after.
The sixth was taken into custody later after his name came up in the course of the investigation.
Several hundred employees disrupted a meeting on October 5 at Air France's headquarters near Paris' Charles de Gaulle airport while executives were detailing plans to lay off 2,900 workers as part of cost-cutting measures.
Human resources director Xavier Broseta had his shirt ripped off and had to be helped over a fence by security guards.
Another executive, Pierre Plissonnier, head of the airline's long-haul flight division, also had his shirt and jacket ripped in the chaos.
Photographs of a bare-chested Broseta were splashed across the front pages and websites of newspapers across the world, including the Financial Times and New York Times.
In total, seven people were injured, including a security guard who was knocked unconscious and required hospital treatment.
At least 10 complaints were also lodged against the protesters: six from security guards and company executives for violence, and one from Air France for hindering the meeting and damages.
An internal investigation at the airline, which is 17.6 percent-owned by the state, has also identified around 10 employees believed to have been involved in the violence, another source said.
Air France is struggling to compete in the face of intense competition from global rivals.
Since the clashes at the meeting, it has resumed negotiations with its pilots about introducing more flexible working practices.
The airline has tried to convince its pilots, who earn an average of €150,000 to €175,000 ($170,000 to $200,000) a year at senior levels, to fly 100 more hours a year for the same salary.
But talks broke down on September 30th.
With pilots rejecting its proposals, the company has instead proposed cutting the jobs of 300 pilots, 900 cabin crew, and 1,700 ground staff. 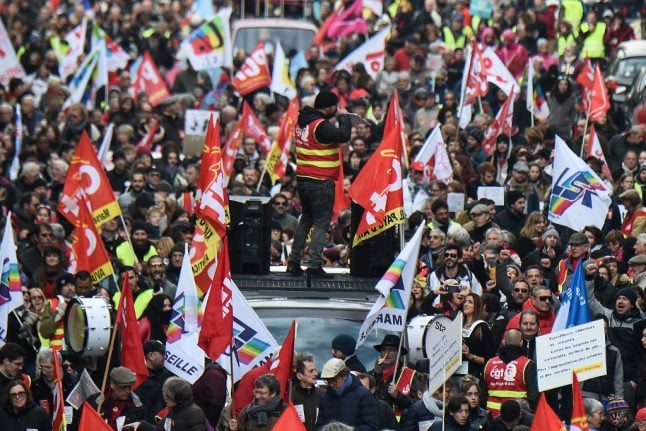 UNIONS
Five things you need to know about trade unions in France
Url copied to clipboard!