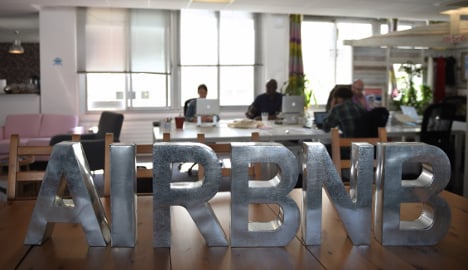 The rise of Airbnb has angered the French hotel industry who say the game is no longer fair. Photo: AFP

Fresh from a recent victory over Booking.com the head of the French hotel industry has told The Local they will now be turning their attention to Airbnb to stop hotels from being driven out of business.

Laurent Duc and France’s hoteliers have long complained that Airbnb is unfair competition due to the fact individuals who rent out their apartment through the site are not subject to the same rules, regulations and taxes as hotels are.

It’s a grievance that echos the gripe of France’s taxi drivers against the rise of companies like Uber and other ride sharing services.

But in recent years the hotel industry in France has had other battles to fight, in particular with reservation sites like Booking.com and Expedia.

Earlier this year they finally won the long legal fight to force Booking.com to allow hoteliers in France to charge cheaper internet prices on alternative sites or to those who book in person. Duc told The Local this week they will now turn their attention to their grievance with Airbnb, which has thoroughly conquered France to the point where Paris is the world's number one destination for users.

“We haven’t even started with Airbnb yet. We have spent five years fighting Booking.com and Expedia to have parity and after all that we find we have unfair competition with Airbnb,” he said.

“We are going to go harder and harder towards the end of the year and try to get the government to include rules and regulations in its next Macron bill,” Duc said.

The Macron bill is the next raft of financial measures expected to be drawn up by the Economy Minister Emmanuel Macron, that are more designed to free up the French economy rather than tighten the rules.

Duc wants authorities to stiffen regulations so those who rent their apartments on Airbnb are subject to the same rules as hotel owners, whether it be around taxes, health and safety, or sanitary standards.

Tourists who use apartments rented out by private owners have no guarantees around safety and cleanliness, he argues, nor with disabled access and minimum sized rooms, which are criteria hotels have to meet.

“We want the government to force Airbnb to give the state what it is owed, we want them to claim the taxes and the VAT from those who rent the apartments,” Duc said.

He also wants the government to crack down on renters in Paris, those who put their flats on Airbnb even though it is illegal, because they are not the owners.

“We want the website to be controlled and those who put their flats online to be given a specific registration number,” said Duc.

He says the rise of Airbnb has profoundly changed the landscape and forced many hotels out of business.

“In the countryside, hotels are closing and the buildings are being divided up and their flats are being put on Airbnb instead,” said Duc.

The president of UMIH also accepted that hotels would have to change with the times to keep up with new competition.