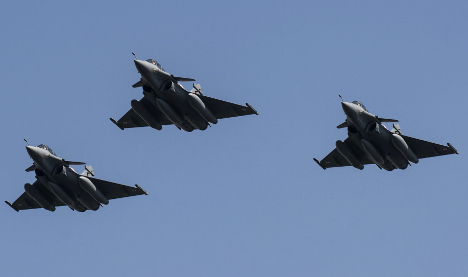 A file image of Rafale jets. Photo: AFP
“Two Rafale jets dropped bombs on an Isis training camp. The objectives were accomplished,” he told Europe 1 radio, adding that further air strikes would follow.
As with a first wave of strikes on September 27th, the attacks focused on the Isis stronghold of Raqqa in northern Syria.
“We know that in Syria, in particular around Raqqa, there are training camps for foreign combattants whose mission is not to go fight for IS in the Levant but to come to France, to Europe, to carry out attacks,” said Le Drian.
He said France's air strikes were complicated by the fact that Isis uses human shields.
“Isis organises itself in such a way that children, women and civilians are in the frontline,” he said.
“The leaders hide in schools, mosques, hospitals, which makes the job of the (international) coalition difficult.”
Le Drian criticised Russia's recent involvement in the conflict, saying that “80 to 90 percent” of its air strikes in Syria were not aimed at IS, but instead at propping up the regime of President Bashar al-Assad, Moscow's long-term ally.
“The Russian military action in Syria over the past 10 days does not target Daesh, their main aim is (to ensure) the security of Bashar al-Assad,” said Le Drian.
“We do not consider Bashar part of the solution.”