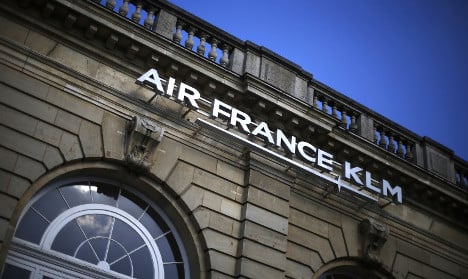 A picture taken on October 9, 2015 shows the facade of the headquarters of the airline company Air France KLM in Paris. Photo: AFP
Xavier Broseta, the human resources director who was pictured on front pages around the world bare-chested and scaling a fence to escape union militants, participated in the discussions.
The talks “went very well,” said Philippe Evain, the head of SNPL Air France, the main pilots' union. A company source also spoke of a “calmer” atmosphere after a turbulent week.
“We are going to continue to work together to establish the framework for the negotiations to come,” said another SNPL representative, Veronique Damon.
The talks focused on measures that Air France can take to try to reduce the 2,900 job cuts planned across various staff categories over the next two years.
President Francois Hollande described the violent scenes at Air France's headquarters on Monday as “unacceptable” and said they put France's reputation at risk.
Prime Minister Manuel Valls has said the ball is now in the pilots' court.
Air France is struggling to compete in the face of intense competition from global rivals, not least Germany's Lufthansa and the combined forces of British Airways and Iberia in Europe.
The airline has tried to convince its pilots, who earn an average of €150,000 to €175,000 ($170,000 to $200,000) a year at senior levels, to fly 100 more hours a year for the same salary.
But talks had broken down on September 30.
With pilots rejecting its proposals, the company has instead proposed cutting the jobs of 300 pilots, 900 cabin crew, and 1,700 ground staff.
Union sources say Air France has now given the pilots three months to reach agreement on new productivity measures. In return the airline would be prepared to reconsider shutting down some of the routes and withdrawing planes from service.