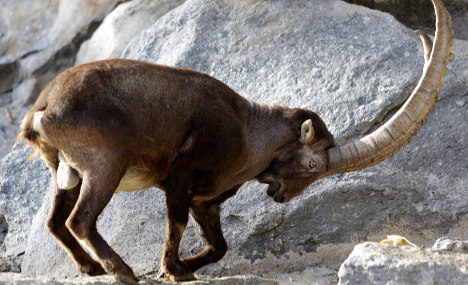 Hundreds of Ibex or Bouquetin are set to be slaughtered in the Alps; Photo: AFP

Almost an entire herd of wild mountain goats or Ibex are to be slaughtered in the Haut-Savoie region of the French Alps and environmentalists are not happy.

The Haut-Savoie council leader, Georges-François Leclerc, decreed on Thursday that, 230 out of the 300-strong heard of wild goats, who graze on the Bargy region of the Alps near the Swiss border, are to be captured and killed this week.

The reason for the cull is due to the fact over 40% of the herd were found to be infected with brucellosis, an infectious disease.

Farmers in the region fear their livestock could become contaminated.

The decision comes after 200 of the goats were slaughtered in 2013, after the first cases of brucellosis were found in two children who had eaten cheese made with unpasteurised goat’s milk.

The controversial action has been given the green light by the National Hunting and Wildlife Office (ONCFS) in order to protect and maintain a ‘healthy core’ of 60-70 wild goats.

However the decision has been met with strong opposition from scientists and environmentalists.

Jean-Pierre Crouzat, spokesman of Frapna (Fédération Rhône-Alpes nature protection), says the approach won’t work “because the more animals they kill the more the disease will spread around the area.”

“The scientific community believe that the infected animals should be eliminated, but in a gradual way,” Crouzat told The Local.

“They should be captured over a period of 3-5 years, tested for the infection, and the healthy ones should be vaccinated.”

He called the council’s response to the situation “chaotic and brutal”, while Carine Bremond, a member of the Bird Protection League (LPO) told Le Parisien newspaper it's “scandalous and appalling” that the council have overruled their application for the decision to be appealed in court.

The Ibex, called ‘bouquetin’ in French, have long been a mainstay of the landscape around the town of Burgy, along with other wildlife including the protected bird species known as the ‘gypaete’.